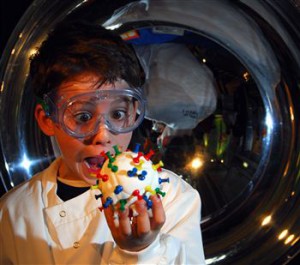 Magnetic nanosludge, slimy splat test dummies and dancing custard are not things that you come across every day.

But this year’s Edinburgh International Science Festival has announced a new exhibition that will let you explore all of the weird and wacky elements of chemistry.

To celebrate 2011 – The International Year of Chemistry, the new exhibition Atomise will be packed with eye-popping experiments, explosive gadgets, drop in demonstrations and hands on workshops.

Supported by the Scottish Government’s Edinburgh Festivals Expo Fund with a grant of £101,000, it will be hosted in the John Hope Gateway of the Royal Botanic Gardens and is set to be one of the highlights at this year’s Science Festival.

“We don’t need an excuse to produce some show stopping, jaw dropping science, but the International Year of Chemistry is a great chance for everybody to find out a little more about how the world around them works.”

Culture Minister Fiona Hyslop said: “Scotland is one of the world’s most creative and innovative nations.

“The fantastic Expo-funded Atomise project offers an interactive and creative approach to learning about modern chemistry that will appeal to young and old alike.”

In another International Year of Chemistry event, TV’s most extreme scientist Dr Bunhead, a Science Festival regular, will be attempting a brand new Guinness World Record live on stage at the Usher Hall on 9 April when he asks the audience to help him create the longest glow-in-the-dark necklace ever made.

Tickets for this event are available from the Usher Hall from the end of this week, and through the Science Festival from the 24 February.

The Edinburgh International Science Festival will run from 9 to 22 April 2011 and the full programme of events, including all those linked to International Year of Chemistry, will be announced on 24 February 2011.

Atomise will be open to the public in the John Hope Gateway at the Royal Botanic Gardens from Saturday 9 April to 5 June 2011.

Further information on schools bookings can be found on www.sciencefestival.co.uk.