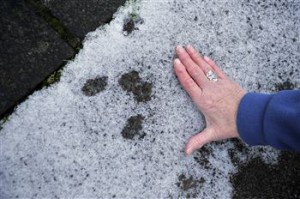 A BIG cat is loose in Edinburgh – if these giant paw prints are to be believed.

Residents in the north of the city are now on edge after they discovered huge paw prints in the snow thought to belong to a big cat like a puma or a lynx.

Experts say that it is possible that the cat prowled into the city to look for food.

Nora Roberston, 81, has lived in Newhaven since she was a child and found the prints near her home during an early morning stroll.

She said: “It was still dark so I had my torch with me, and the light reflected off one of these large prints,” she said.

“I followed the track all the way to my neighbour’s garden, which showed it had jumped up over a wall.

“I’ve never seen anything like this. We get a lot of foxes around here and there is a lot of woodland and unused paths.”

It is not uncommon for large cats such as this and their prints to be spotted in Scotland, the Perthshire Puma and the Beast of Balbirnie are notorious if somewhat elusive.

Sceptics believe that the tale of big cats existing is Scotland is nonsense as there should be some photographic evidence, like in the case of other popular legend, the Loch Ness monster.

George Redpath, is a member of Cupar-based Big Cats Scotland, he said: “It’s unlikely but not impossible.

“We have been getting more sightings in Edinburgh, Dundee and Glasgow.

“Perhaps – as foxes have – they have come into cities more to scavenge for food, particularly after the freezing weather we’ve had over the last months.

“It can be difficult to tell from prints in the snow, it can sometimes distort the real size of a print. It is hard to confirm any suspicion like this until there is a conclusive photograph, but the sightings continue.

“Over the weekend we had one reported from the Bilston area.

“We just don’t know what type of cat they could be. In Scotland we’ve had puma, lynx and possibly leopards.”

Maureen Porteous, 71, is Nora’s neighbour and spied a large cat in her garden earlier in the year but had thought nothing of it.

She said: “I just don’t know, it all seems strange, and these prints are certainly much bigger than a normal cat,” she said.