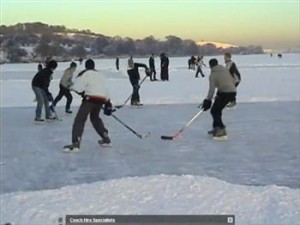 THRILLSEEKERS took their lives in their hands by playing an ice hockey match in the middle of a frozen loch.

YouTube footage shows the daredevils even lugged their goals out on to the ice for the game.

The players ignored clear warning signs at the side of Castle Semple Loch, Renfrewshire.

Safety chiefs say such stunts could easily end in tragedy and urged Scots to stay off frozen lochs for the rest of what promises to be a long and harsh winter.

The “Pond Hockey” game took place in December and the footage was posted on YouTube last week.

Dozens of youngsters descended on the frozen loch and first cleared away a large rectangle of snow to make the pitch.

They then placed the goals and, armed with sticks and a puck, got the game underway.

The description of the video claims that “the majority of the hockey players are (or were) associated with the North Ayrshire hockey team”.

A spokesman for Strathclyde Fire and Rescue said: “Playing ice hockey on a frozen loch can seem exciting but there is the danger that the ice will be unsafe.

“We would advise people going near places like Castle Semple Loch to admire the scenery but not go on the ice because they could be risking their life.”

The Royal Society for the Prevention of Accidents (Rospa) said: “Although frozen water can look tempting, there’s simply no way of knowing whether the ice will hold your weight and it’s often too late by the time you find out that it won’t.”

“Ice-related drownings, however, are easily preventable. We advise people to take care around the edges of lakes, rivers and lochs, because snow can obscure them, and we recommend that dogs are kept on a lead so they do not run out on to the ice.”

The organisation says 20 people have died in the UK in the past decade as a result of falling through ice.

As well as the obvious risk of drowning, falling into icy water can cause the rapid onset of hypothermia or heart attacks, say Rospa.

The loch is part of Clyde Muirshiel Regional Park. A spokeswoman said the general manager did not wish to comment because it was “not a current news issue”.

But an insider admitted they were aware of the problem. “This happened last year as well. We have put up signage but we do not have any powers to stop people. We advise people to take care and be responsible for their actions.”

No one was available for comment from North Ayrshire Ice Hockey Club.

For the second winter running, fire and rescue chiefs have issued a general warning to stay off all iced-over ponds, rivers and “other bodies of water”.

In November last year, a man had to be pulled from Kilmardinny Loch, Bearsden, East Dunbartonshire, after falling through the ice while trying to rescue his dog. 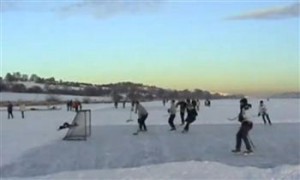