THEY are run over in their thousands every year. But now a squirrel has taken revenge by knocking out a car. 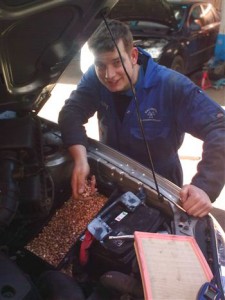 Andrew Nairn took his barely driveable vehicle to a garage to be told by a mechanic that 6lbs of nuts had been hidden in the engine by a squirrel.

The rodent had stolen hundreds of peanuts from a bird table at Andrew’s home in Duns, Berwickshire.

The crafty creature then snuck into his garage, climbed inside the Kia’s air filter system, and used it to store the nuts.

Andrew, who is retired, said: “The car wasn’t going well, especially going up the hills.

“When I took it in I thought it might be something quite serious. I couldn’t believe it when they gave me a bag of peanuts.”

He added: “There was a grey squirrel around about but I can’t understand how it could get into the garage.”

He said: “I’ve never seen anything like this before so it was a bit of a surprise.

“I’d done all the usual checks, plugged it into the computer and everything and nothing came up.”

Eventually, Stuart took apart the air filter system. “I couldn’t believe my eyes,” he said. “An engine needs both air and fuel to run and I discovered that this car was getting plenty of fuel but not enough due to a large number of peanuts blocking the air intake system.

“It seems that a local squirrel had been pinching nuts that were meant for the owner’s bird table, and storing them in the car’s air intake.”

Andrew Whitehead, owner of J Aitchison, said he had not seen anything like it during 25 years in the business.

He said: “The air intake hose runs from the grille into the car. All they need is a gap of an inch or so.”