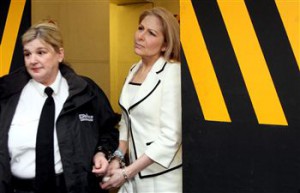 ildren until five minutes after their mother jumped from a balcony.

Theresa Riggi stabbed each of her children – eight-year-old twins Gianluca and Augustino, and five-year-old Cecelia – eight times, just one day after she failed to attend a court hearing.

When she didn’t show on 3 August last year, her husband’s lawyer told judge Lady Clarke there was “a real emergency in this matter” and she issued an order for social workers to supervise the children.

But the City of Edinburgh Council’s children and families department say they only received the faxed ruling at 3.05pm the following day – five minutes after Riggi had thrown herself over a balcony at a flat on Slateford Road.

The order had been handed to the Messenger At Arms, an independent firm which had the responsibility of tracing the family, at 2pm the previous day but it took them over 24 hours to alert the bewildered council, who say they had no knowledge of the family.

Councillor Marilyne MacLaren, leader of the children and families department, said: “The timing was incredibly sad.

“Our people were gutted.

“It’s ghastly to think about it.

“If we had known about it, social workers would have acted on it immediately.

“I shall be writing, asking for an explanation, as a first step to understanding why there was a delay.”

American-born Riggi pleaded guilty to culpable homicide on the grounds of diminished responsibility at the High Court in Edinburgh on Monday.

It was revealed that she and her husband Pasquale had been locked in a battle over his access to the children.

She reportedly told Mr Riggi, who lives in Aberdeen, to “say goodbye” on 2 August – one day before the children’s bodies were discovered at the rented flat, where she had fled to.

Less than a month before the killings, Lord Malcolm had issued a court order banning 47-year-old Riggi from taking her children abroad, and on 16 July last year Grampian Police issued a missing persons appeal over the family, who were traced to the Slateford Road property five days later.

Pam Dignan, a dance instructor who taught all three of the children, said: “What she must be feeling right now, I just don’t know.

“She loved her kids, she really did – she absolutely adored them – and maybe she adored them too much.

“There are hundreds of families who separate and divide up their time with their children.

“What Theresa was thinking when she did this, I don’t want to think about myself.

“We all still think about the children and always will.”