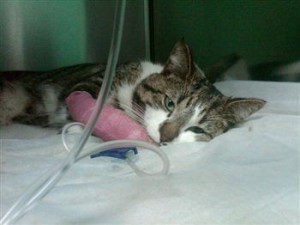 A WORKMAN scooped up an injured cat with a shovel and tossed it into bushes at the side of the road.

The injured moggie, named Beezer by veterinary staff who treated her, was thought to have been previously thrown from a car.

The cat was left virtually unconscious and had a massive haemorrhage on one of her eyes as well as a gash on her face and her right foreleg was badly damaged.

Paramedic Juliette Blair, from Dunfermline, witnessed the shocking act in the early hours of 20 March when she was on her way home from work.

The animal lover owns three cats and was completely shocked by what she saw.

She said: “I couldn’t believe what I was seeing. I got out of my car and ran towards them.

“I don’t know if they thought I was a police officer, because I was wearing high-visibility clothing, but they scarpered.

“I was really upset. The cat was moving, so the man who tossed it away with a shovel knew very well that it was still alive.”

She took the injured cat to Inglis Veterinary Hospital in Dunfermline for treatment and decided to adopt the cat soon after.

She has now named her Tigger and says that she didn’t want the Cats Protection League to have to pay for her treatment so she is going to.

She added: “It may cost me a few shifts in overtime but I don’t care, I just love animals.

Vet Megan Wood said: “It would have been bad enough if it was deliberately injured by someone but to be scraped off the road with a shovel and tossed aside was dreadful.

“I can’t believe anyone could be so cruel.

“It was in a pretty bad way. It was virtually unconscious, she had a gash on her face, a massive haemorrhage on one of her eyes and her right foreleg was badly damaged.

“But she did not have shredded claws, which are usually the tell-tale signs that a cat has been hit by a car.

“I can only conclude that the cat had either been kicked about by someone or had been thrown from a car onto the road.

“This poor animal suffered horribly and she is lucky to be alive.”

Little Tigger is recovering well but it is feared that her leg may be permanently damaged.

The SSPCA have been informed of the incident.