SINGLE Christian women across the country are putting their love lives in Gods hands – by praying for a husband.

Prayer groups have been formed in churches and homes where women gather together once a month to ask for a partner to be sent to them.

The groups have been set up as unattached ladies say they have found it increasingly difficult to find a man of a similar age who shares the same beliefs.

They have asked for help from above to “stop being too fussy” and for more men to join their churches.

It is also believed that the Roman Catholic Church has advised people to pray to St Raphael – the patron saint of happy meetings.

One of the first prayer groups was thought up by 40-year-old Kirsty Wedgewood, who said she set it up as much for others as for herself.

Mrs Wedgewood, who is now married to a man she found on a Christian dating website, grew up in New Zealand after her father emigrated from Dundee.

She said: “There were a lot of single women in my church and they used to complain that all the single men were much younger than them.

“One night I was out with another single woman from my church and she got quite upset about the fact she hadn’t been able to find someone.

“I decided we needed some help from above so I started the prayer group.

“We used to meet in each others’ homes and tried to keep it pretty informal.

“Some women would pray that they could stop being so fussy.

“At other times we would pray more generally around the areas of relationships.

“We also asked God for more men to join the church.

“I’d been single for years.

“I’d met people along the way, but nothing ever came from it

“I’d been praying on my own but I decided it would be better to pray with other women.

“I feel like God wanted me to get people together.”

Mrs Wedgewood signed up to a faith-specific dating website soon after setting up the group, and her prayers were finally answered when she met 43-year-old Orson.

The couple were engaged within four months and married in 2009.

Mrs Wedgewood, who now lives in London, said the prayer groups can help those people who are embarrassed to admit they are lonely to open up.

She said: “The encouragement you get from others really helps.

“The group I set up is still going strong and has new members.

“I’ve also heard of other groups being set up elsewhere.

“I would recommend other people try it.

“I believe God hears your prayers.” 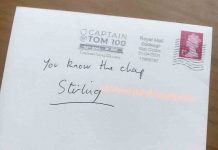