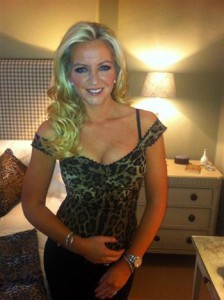 ULTIMO boss Michelle Mone has admitted that her multi-million pound fortune has still not made her happy.

The Scottish entrepreneur, who turns 40 this week, is regarded as one of the top businesswomen in the country with her lingerie company turning over tens of millions each year.

Just earlier this year, a childhood dream was realised when the Scots business tycoon purchased a house in London’s prestigious Mayfair for £2million.

But Mone said this week that despite her fortunes, she is “tired and exhausted” and the money has not ensured her happiness.

Mone also admitted that her decision to pose for pictures in her underwear had resulted in her publicity-shy husband not talking to her for days – and that they cannot talk about it even now.

She said: “I always thought that money would make you happy but it is seriously not true. Chasing the money, the houses, the cars, does it really all matter? Money does make things easier and takes the pressure off but it certainly doesn’t ensure your happiness.”

While business profits have soared through the roof, Mone’s personal life has taken a hit since she and her husband Michael set up the company MJM in 1999.

The Glasgow born business woman suffered humiliating press coverage last year when it was wrongly suggested she had been having an affair with soap start Shane Richie.

The two were pictured walking down a street arm-in-arm after becoming close while filming the reality show 71 Degrees North.

She said: “It was all blown out of proportion. The worst thing was how hurtful it was for Michael and my family.”

But Michelle found her personal life once again in the firing line after she posed for Ultimo in her underwear just months after the allegations were made.

Her husband and business partner was left seething when Michelle took the decision to undress for a racy advertising campaign for the company.

But she said the decision allowed her to close a “horrible chapter” in her life which had seen her gain several stone.

“For 21 years of my life, I have given my all to my family but this was for me I felt it was something I needed to closure. It struck a chord with many women- I received thousands of messages and emails of encouragement.

“But Michael is a completely private family guy who does not like media attention at all. He was completely appalled that I had posed in my underwear. He didn’t speak to me for days and it’s something we can’t talk about, even now.”

The couple set up in the company 12 years ago after the birth of their third child, without any qualifications or formal business training.

The launch of her gel-filled bras was an international success but a year later, a Canadian distributor absconded with £1.5million and six months’ worth of stock.

The couple were forced to remortgage the family home but managed to stave off falling bankrupt by using their life savings.

The company survived but the stress caused Michelle to use food as a comfort.

She said: “My weight destroyed my life for ten years. I was miserable. I was building up this wonderful business and creating an amazing life but I could not control my weight. The photoshoot in my underwear was my way of saying, “No more.”

But the now slim 5ft 10in Mrs. Mone, who will celebrate her birthday in Glasgow this week, said that she still feels like she “hasn’t made it” yet.

“I don’t think I’ve made it in the business but at the same time I have to accept I’m not Wonder Woman and it’s getting harder to juggle everything.”

“For the first time, I’m tired and exhausted. It could be a lot worse. There are people out there who cannot afford to pay their gas bill and I’m fortunate enough not to be in that position. I’ve decided that happiness has to come first.

“Who knows what’s going to happen in the future? I take each day as it comes and what I want more than anything is to continue to build on my happiness and be happy,” she added.