Two funerals for boy suicide mum “could not bear to leave” behind.

SUICIDE mum Michelle Stephen killed her five year old son because “she could not bear to leave him behind,” a funeral heard today.

At a moving earlier service for five-year-old Leon Weston, Rev Mark Nicholas told mourners: “We should not be here today, Leon had his whole life ahead of him.”

Around 100 grieving friends and relatives packed out a church in Dalkeith, Midlothian, for the funeral of Leon, who was killed by his mother just before she took her own life. 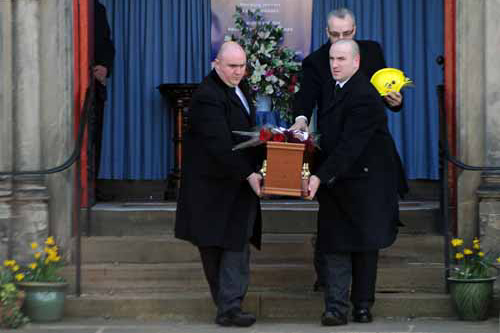 Later on in the day mother and son were sadly reunited for a second service held at Mortonhall Crematorium.

The double tragedy, which happened at their home in Sighthill, Edinburgh, on February 28 this year, shocked Scotland.

It was widely reported that Michelle’s father, prison officer Jimmy Weir, had died of cancer just weeks before she took her own life and killed her son.

Leon’s father, Kevin Weston, who was divorced from 31-year-old Michelle, was among the mourners who listened to Rev Nicholas. 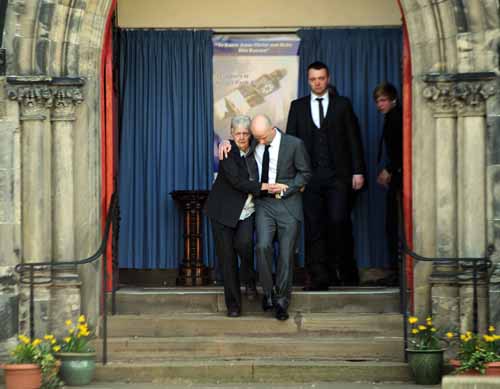 One mourner had to be supported as they left the church

Rev Nicholas said: “Jimmy’s death in January was a sore blow for Leon. Though he was too young to tell quite how much it had affected him the toll it took on his mum proved unbearable and so we find ourselves here today.

“Many people have said that, in her own mind, Michelle was off to see her Dad and couldn’t bear to leave Leon behind.

“Now for you, his family and friends, you can’t bear the truth that Leon has gone. The events of these last days have left everyone shocked and distraught. When something as tragic as this occurs there is not just private grief to deal with but the sorrow of whole communities who cannot quite believe what has taken place in their midst. 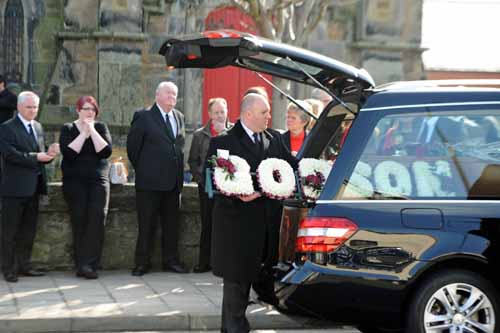 Floral tributes to the five-year-old filled the hearse

“And yet at the heart of this a young life has been taken away. This is what is so hard to come to terms with.”

The minister described Leon as a “canny” boy who had his “whole life ahead of him.”

He said: “Leon was a canny lad, as bright as a button and you couldn’t pull the wool over his eyes – ‘I know everything!’. He was loved by everyone who knew him. 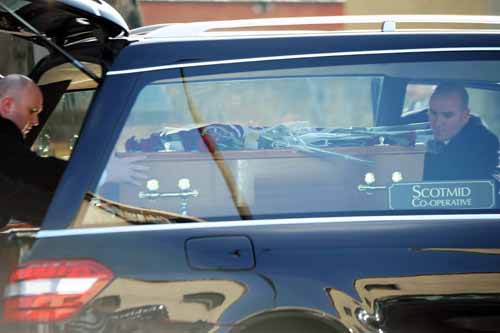 Clothing from Hearts football team could be seen on the coffin

“Kevin said that a fond memory of his was going racing sticks in the River Esk, he seemed to really love that so much so that two or three hours would pass like two or three minutes.

“We should not be here today, Leon had his whole life ahead of him. None of us expect to have to say goodbye so soon. The pain of grief is hard to bear and the tragedy of the events of recent days leave us raw and numb, disbelieving that such a thing is even possible.”

The 30-minute service at St. Johns & King’s Park in Dalkeith started at 11am with the mourners mostly dressed in black, with some flashes of red, perhaps to symbolise Leon’s support of Manchester United football team, whom he supported alongside Hearts.

Michelle was devastated by the death of her father Jimmy, centre

The crowd entered the service to the moving sounds of “Precious Child” by Karen Taylor, and his coffin was accompanied by three red and white wreaths, which read Son, Leon and Godson.

Rev Nicholas gave a moving insight into the life and personality of Leon.

He said: “Leon started as a shy boy but as he got older he came out of his shell. And he was a man’s boy. When he was at the club he would gravitate to the men as they stood together, looking for his cider, which was, in truth an Appletise. 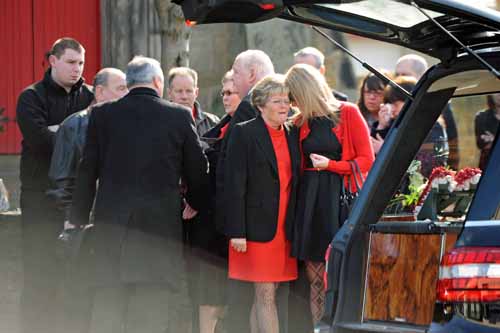 “As his dad said Leon was a pocket rocket. He would play football with Jimmy in the living room with a rolled up sock as a football and then proceed to kick lumps out of him.

“Leon was fire engine daft and every time a fire station was passed in the car you would have to guess how many fire engines were there. He also used to keep an eye out for Eddie Stobbart lorries,” he added.

He also spoke of his love of “brown and red sauce” on his chips and that he loved a bowl of supernoodles. 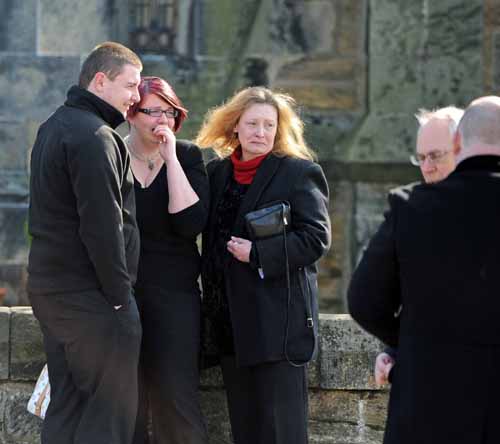 Mourners will gather for a second ceremony later today

He said Leon’s two favourite sings were “The lazy song” by Bruno Mars, which he called “The Monkey Song” and LMFAO’s “I’m sexy and I know it”

The service included selected prayers and blessings and the family asked for donations to be made to the Royal Hospital for Sick Children in Edinburgh.

The congress exited to “Arms of an Angel” by Sarah McLachlan, with Kevin helping his mother, Mary, out of the church as she was overcome by emotion. 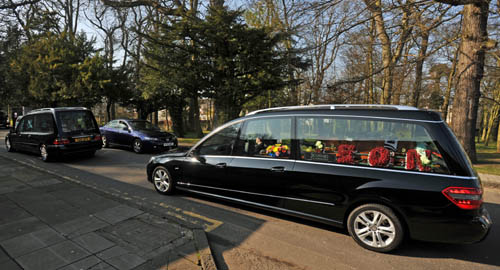 A hearst with Michelle’s coffin was followed closely by her son’s.

A joint funeral service for Leon and his mother was held at Mortonhall Crematorium at 3pm today.

Michelle’s coffin which was draped with a tartan hearts scarf, was closely followed by a second hearst carrying her son’s coffin.

Leon’s coffin was decorated with a hearts scarf and plastic fireman ‘s helmet, with a maroon and white wreath, which read ‘Son’.