A MAN who discovered WWII explosives on a highland beach put them in his pocket and attempted to re-bury them before alerting the police, it emerged today.

The hapless beachcomber discovered the two bombs with his metal detector at Nairn’s East Beach earlier this week.

After returning home and researching his find on the internet, he realised their possible danger and contacted the authorities. 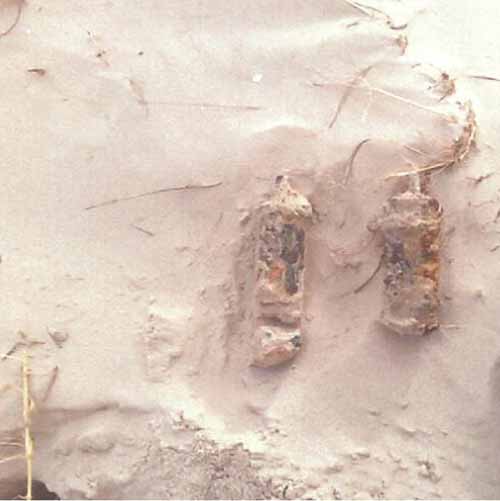 The explosives were identified as mortar bombs

He told police about his discovery on Wednesday morning, which sparked a bomb squad alert at the popular Nairn beach.

Police and coastguard officers found the bombs buried in around 12in of sand at 9.45am close to an area known as Kingsteps.

A 110-yard cordon was imposed around the devices while they awaited the arrival of Army bomb disposal experts from Edinburgh.

They identified the devices as 2in mortar bombs, thought to date from World War II when the beach was used for military exercises, including training for D-Day landings.

The remains of tanks used in the rehearsals have previously been found further east along the coast from Nairn.

He warned that anyone finding suspicious items on the beach should contact the emergency services as a precaution.

He said: “He didn’t think there was anything dangerous about them. But when he went home and looked them up on the internet he thought they looked suspicious.

“He did get a scare when he saw that they could be explosive.”

A spokesperson for Northern Constabulary said: “Police can confirm that bomb disposal experts have attended and have made the items safe.”

The area is popular with walkers and dog walkers and Police are advising people not to visit that particular spot until it is made safe.