EXPERTS believe they have found the remains of the earliest stringed instrument ever found in Western Europe – dating to more than 2,300 years ago – at an excavation on the Island of Skye.

Cabinet Secretary for Culture Fiona Hyslop today revealed the small wooden fragment that it is believed comes from a lyre. It has been burnt and broken, but the notches where strings would have been placed are easy to distinguish on the artefact. 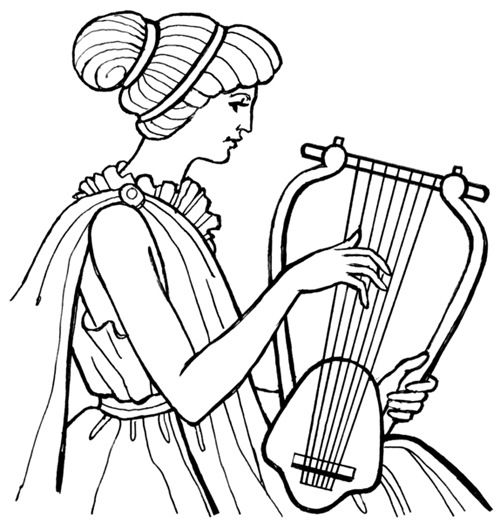 Images of Lyres are frequently seen but remains are rare

Dr Lawson, of Cambridge Music-archaeological Research, said: “For Scotland – and indeed all of us in these islands – this is very much a step change. It pushes the history of complex music back more than a thousand years, into our darkest pre-history. And not only the history of music but more specifically of song and poetry, because that’s what such instruments were very often used for.

“The earliest known lyres date from about 5,000 years ago, in what is now Iraq: and these were already complicated and finely-made structures. But here in Europe even Roman traces proved hard to locate. Pictures, maybe: but no actual remains.

“But it’s the location of the find that keeps amazing – and delighting – us. Here is an object which places the Hebrides, and by association the neighbouring mainlands, in a musical relationship not only with the rest of the Barbarian world but also with famous civilisations. It now becomes a world that was held together not just by technology and trade but also by something as ephemeral and wonderful as music and poetry and song.”

Cabinet Secretary for Culture and External Affairs Fiona Hyslop said: “This is an incredible find and it clearly demonstrates how our ancestors were using music and ritual in their lives. The evidence shows that Skye was a gathering place over generations and that it obviously had an important role to play in the celebration and ritual of life more than 2,000 years ago.

“A project like this brings so many organisations and individuals together. The site has revealed insights into the practises of people who continued to use the cave complex over a very long period.

“This find is exciting and shows the variety of expertise there is in archaeology. The skilled excavation team realised immediately that they had something special, the finds were then passed onto the laboratory and then specialists in musical traditions were able to support that initial realisation. All of it leading to today and us being able to unveil this replica of what the lyre would have looked like.”

The bridge was found during the excavations of High Pasture Cave.

Archaeologist Steven Birch said: “Access to the natural cave at High Pastures was of prime importance to the people using the site and throughout its use the entrance was modified on several occasions which included the construction of a stone-built stairwell. Descending the steep and narrow steps, the transition from light to dark transports you out of one world into a completely different realm, where the human senses are accentuated. Within the cave, sound forms a major component of this transformation, the noise of the underground stream in particular producing a calming environment.

“The cave provided a major focus for a wide range of activities including metalworking, craft specialisation and the deposition of everyday objects, human remains and the debris from some major feasting events. These activities took place at the site over a period of some 800 years between the Late Bronze Age and Iron Age, although the use of the site extends back in time for at least 5000 years.

“The discovery of the wooden bridge from the musical instrument represents a fitting end to the excavations at the site and conjures up a vivid image of the past, showing people gathering together for religious ceremonies, feasting on pig and cattle, and drinking to the accompaniment of music.”

Cultural historian Dr John Purser said: “What, for me, is so exciting about this find is that it confirms the continuity of a love of music amongst the Western Celts.

“Stringed instruments, being usually made of wood, rarely survive in the archaeological record; but they are referred to in the very earliest literature, and, in various forms, were to feature on many stone carvings in Scotland and Ireland, and to become emblematic in both countries.

“Such an instrument would traditionally have been used in a number of contexts, but in particular for accompanying song, declamation and recitation. The panegyric tradition is deeply embedded in Gaelic culture, and within that tradition includes praise songs, funeral elegies, and incitement.

“In the Gaelic tradition there were three basic types of music – “Sleep strain”, “Wail strain” and “Laughter strain”. We may legitimately imagine the musician who owned and played this instrument, performing such music both as a soloist, in combination with other instruments and especially, with the human voice.”

The project was supported by Highland Council, Historic Scotland and the National Museums of Scotland.

Convener of The Highland Council, Councillor Sandy Park said: “The Highland Council is delighted to support the research at High Pasture Cave and we are very excited about the implications of this extremely significant find. The Island of Skye has long been a seat of musical tradition but we had no idea how far back in time people were playing in this area.

“The discovery of a fragment of the oldest stringed instrument in Western Europe, will not only put the Highlands of Scotland firmly on the musical map of ancient Europe but it will benefit tourism on the island immensely. I am looking forward to hearing the full results of this research which I am sure will be a major feature in the Highland Archaeology Festival seminar in October.”

Dr Fraser Hunter, Principal Curator, Iron Age and Roman Collections, National Museums Scotland, said: “This find puts sound into the silent past. National Museums Scotland is delighted to be supporting the project by carrying out work on a wide range of finds from the site. This new research is casting fresh light on the lives and beliefs of people 2000 years ago.”

When fieldwork was completed in 2010 the artefacts were transferred to AOC Archaeology in Loanhead, Edinburgh, for conservation.

Dr Andy Heald, MD of AOC Archaeology said: “Previous to this the earliest musical representation we had encountered had been a carved concert lyre and plectrum on the side of an exquisite Roman altar we excavated from Musselburgh in 2010 but to have an actual fragment of an even earlier lyre really fires the imagination. It brings another dimension of our Iron Age antecedents to life.”