FORMER England rugby international and Gloucester centre Mike Tindall has signed up to become an ambassador for the Air Ambulance Service.

Tindall, whose 11 year career as an England rugby international player which earned him 75 caps, has come on board to help support the charity with its national PR campaign, fund raising and awareness.

First established in 2003 as a charitable organisation, the air ambulance service now provides a vital helicopter emergency medical service across five counties in the heart of England and will shortly launch a bespoke children’s air ambulance across the UK. 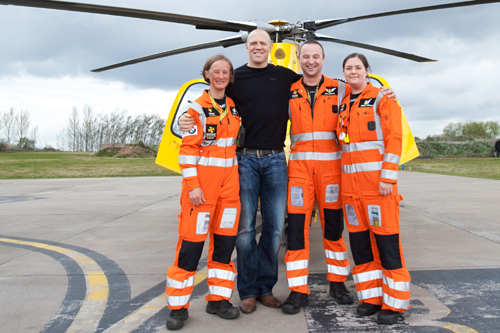 The Air Ambulance Service is a charity particularly close to Tindall’s heart because of the valuable life saving work of the service and in particular its close connection to rugby.

Due to the physical nature of the sport, the Air Ambulance Service often attends to many rugby players who have received serious head, neck and spinal injuries.

These types of injuries, which account for some of the highest incident call outs for the service, require the utmost care and the fastest possible medical attention, which the the Air Ambulance Service paramedics and helicopters provide.

Commenting on the appointment Mike said: “I am delighted and honoured to have been asked to become an ambassador for the air ambulance service and to help raise awareness for such a truly worthy cause.

“Throughout my career I have been aware that there have been many serious and potentially life threatening injuries on the rugby pitch, the air ambulance service are the angels of the sky, their dedication and commitment to saving countless lives is truly heroic and humbling to witness in action.

“I am privileged to have been asked to support this cause and to highlight the importance of this valuable life saving service.”

The Air Ambulance Service operates two fast response, state of the art Agusta civilian helicopters that can be airborne in less than 45 seconds.

With a top speed of 200 mph, a team of paramedics and a doctor can be on scene in a matter of minutes. Known as the “Platinum 15 Minutes” this rapid response emergency service can often mean the critical difference in saving lives and preserving life changing injuries.

Last year The Air Ambulance Service reached its 10,000th mission landmark and is called out to attend an average of 150 missions each month. It is the busiest Air Ambulance service in the country and serves a total population larger than the whole population of New Zealand (4.4million)

Commenting on Tindall’s appointment CEO Andy Williamson said, “We are delighted to welcome Mike Tindall on board as one of our first sporting ambassadors for The Air Ambulance Service.  We attend numerous rugby and sports related incidents every year providing vital life saving treatment at the scene and en route to hospital with the highest standards of clinical excellence. Mike’s outstanding career on the field as a professional rugby player and his generous support, will enable us to reach out to the rugby community and wider audiences to help inspire more people to become involved with The Air Ambulance Service.”

The Air Ambulance Service is an independent charity which relies solely on public donations, its own fund raising activities and sponsorship to provide the HEMS service It receives no Government or National Lottery funding and the role of its sporting and celebrity ambassadors are critical to its fund raising activities.

The organisation won a coveted 2011 Orange Business Award and national recognition for its fundraising strategies. It is now regarded as one of the most successful charitable organisations of its kind and is an outstanding example of the “Big Society” blueprint in action.