The Scottish SPCA is appealing for information after two young cats were found dumped inside a cardboard box in Edinburgh.

Scotland’s animal welfare charity was alerted by a resident of Murrayburn Park in the Westerhailes area of the city after the frightened duo were spotted on Thursday afternoon (12 April).

The black and white and tortoiseshell females, who are around one year old, are now being cared for at the charity’s Edinburgh and Lothians Animal Rescue and Rehoming Centre where they have been named Emma and Claire. 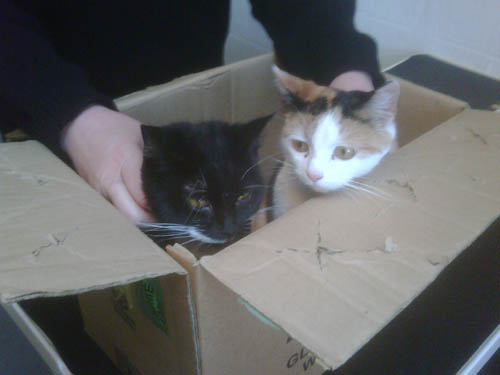 Emma and Claire were dumped in a carboard box in Edinburgh.

Senior Inspector Stuart Murray said, “Emma and Claire were found on a small grassy area outside a block of flats.

“The lid of the cardboard box was closed and there was no food or water inside.

“Understandably, they were rather distressed when they were rescued but are in good condition.

“Although they were left somewhere they would be found relatively quickly, the person who abandoned Emma and Claire couldn’t have been sure whoever found them would help them.

“We are appealing to members of the public to come forward if they recognise these girls as we are keen to trace their owner.”

Abandoning an animal is an offence that carries stiff penalties and anyone found guilty of doing so can expect to be banned from keeping animals for a fixed period or life.
Anyone with information relating to this abandonment is being urged to contact the Scottish SPCA Animal Helpline on 03000 999 999.