A LOYAL Hearts fan was hospitalised after being sent tumbling amid exuberant goal celebrations at Saturday’s cup final.

Jimmy Glendinning, 57, was left lying on a stairway in the Hampden stand amidst the celebrations of his fellow fans, as Ryan McGowan headed home their fourth goal of the match.

Not only did Jimmy miss out on the fifth and final goal but also his team lifting the Scottish Cup in the first all Edinburgh final in 116 years. 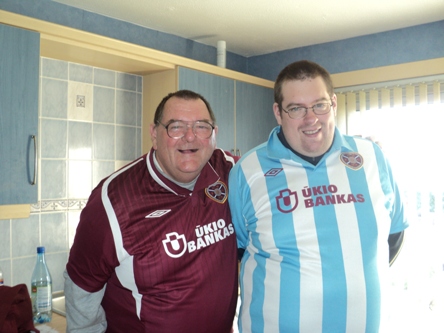 BROKEN JAMBONE: Jimmy pictured alongside son Craig before the match

Although onlookers around him hurried to his assistance, Jimmy had to be carted off to a first aid room before later receiving treatment in hospital for a broken hip and wrist.

His stint in hospital where pins and plates were inserted in to his hip also meant that he could not attend the club’s victory parade the following day.

Jimmy, who is originally from Edinburgh but now lives in Rosyth, said: “It all happened after Hearts got their fourth goal.

“I was shunted along as people around me were celebrating. I got knocked into the aisle and on to the steps.

“When I hit the ground it felt like my leg was awfully twisted. I was trying to get up but I couldn’t. I could feel something was wrong.

“It meant I missed the fifth goal and I didn’t get to see the team hold up the Cup.

“I was completely gutted.

“My son, Craig, was there with me and he went down to the recovery room to ask if I was all right.

“He wanted to stay with me but I told him to go back up to watch what was happening.”

Craig, 27, couldn’t believe his dad’s bad luck and is disappointed his dad was not able to witness one of the most momentous moments in the club’s history.

He said: “I’m really sad he missed the team lifting the Cup and the parade. I really wanted to share it with him. We’ve always been Hearts fans.”

Kenny Bow, secretary of the Dunfermline and District Hearts Supporters Club also expressed his sympathies towards Jimmy and his family.

Mr Bow said given that Jimmy had travelled to the match with other club members, “he would have been first in line for Sunday’s procession”.