THE term ‘Dad’ has removed from an NHS guide to childbirth, over fears it may offend gay couples.

Ready Steady Baby has been handed out by health professionals to all expectant parents for the last 14 years.

The 220 page pamphlet gives advice on dealing with pregnancy and guides parents through the process, as well as their child’s first year. 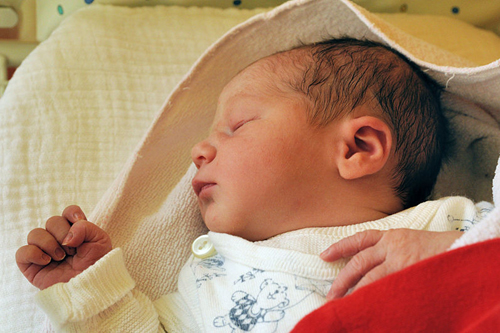 The term “dad” has been removed from the NHS pregnancy and parenting guide  Photo:Taxiarchos228

But after receiving a complaint that the tax-payer funded guide “was not inclusive of people in same sex relationships”, health bosses ordered a revision.

After carrying out an equalities assessment, it was decided to replace the word “dad” with “partner”.

Norman Wells, of the Family Education Trust, said: “This is all part of an agenda to present as natural a type of family that cannot be created by natural means.

“The NHS should not be squandering tax payers’ money to advance the cause of a minority interest group.

“No matter how much effort is made to present positive images of families headed by same-sex couples, the fact remains it takes a man and a woman to create a child.”

TaxpayerScotland said the NHS should be focusing on other priorities.

Campaign manager Robert Oxley said: “It’s barmy that the NHS is wasting money reprinting guides because of a single complaint. Becoming a dad isn’t synonymous with one type of couple so it seems ridiculous to worry about changing it. The NHS has bigger priorities than prescribing how to define who wants to be called dad.”

A spokesman for NHS health Scotland, which is behind the booklet, said: “It is standard practice to review publications on a yearly basis, if not more often.

“At the time this complaint was received the Ready Steady Baby text had just been through its annual review, changes made and the new edition was printed in December 2011.

“The review process identified the need to use language that was more inclusive, particularly in relation to same sex partnerships.”

The booklet is not the first target of the public sector’s equality policies.

Each year £6 million of public cash goes towards employees who ensure political correctness in public bodies.

The NHS alone has 42 such staff members, who work to ensure “diversity and equality”.

Councils, police forces and the Scottish Government all have staff holding similar roles.

Last month it was revealed that paramedics and nurses are being sent on courses to teach them how to ask questions in a politically correct manner.

The classes are designed to allow them to ask for personal information without upsetting minority groups, such as gypsies and homosexuals.