THE city centre basement where David Gilroy is believed to have murdered ex-lover Suzanne Pilley has been put up for rent.

Property agents are looking to lease the basement where the 38-year-old bookkeeper was last seen in 2010.

The ground and basement floors of the city centre building in Edinburgh are being rented out for around £107,000 a year. 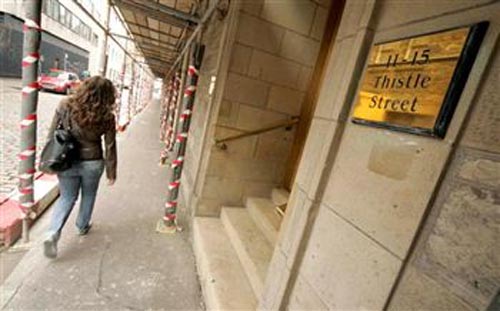 The building was renovated and is now up for rent

Gilroy was sentenced to at least 18 years in jail last month for murdering Suzanne and dumping her body in a secret grave in May 2010.

And now two lower floors at 11 Thistle Street are on the market, where it is thought he killed his ex-lover.

Property agents do not mention the case in the property details.

Instead they boast of its “central location”, car park and “excellent transport links”.

Gilroy’s and Ms Pilley’s former workplace Infrastructure Managers is still based on the second floor of the building.

After Ms Pilley went missing, police and forensic teams spent weeks examining the basement where she is believed to have been killed before being stored in the boot of Gilroy’s Vauxhall Vectra.

The basement area was cordoned off for months but following a renovation, it is now up for rent.

“This central location is ideal for all the superb facilities and amenities offered in the city centre, including unparalleled transport connections, numerous bars, restaurants and hotels together with ample shopping on Princes Mall and the St James Shopping Centre.”

It continues: “The east end of George Street is regarded as a hub of commercial activity and includes office occupiers such as Standard Life, Royal London, IBM, HBOS and Fidelity.”

Ms Pilley sparked a major missing person hunt when she disappeared on May 4 2010.

The divorcee arrived for work that morning but never made it to the second floor of the building.

Prosecutors believe that Gilroy killed her in the basement of the building and buried her the next day more than 100 miles away in the forests of Argyll.

Police spent £320,000 searching for her body but it has still not been found.

He was eventually convicted on circumstantial evidence when cadaver dogs detected an “interest” in the boot of his silver car.

The married killer is now appealing his conviction.