FOUR teams of health professionals took over nine hours to get an X-ray for a 90-year-old woman who fell at home, her furious family revealed today.

Rhoda Forbes slipped in the bathroom of her sheltered housing but managed to pull the emergency alarm.

A care worker at the home responded to the alarm but couldn’t lift the pensioner and called for an ambulance. 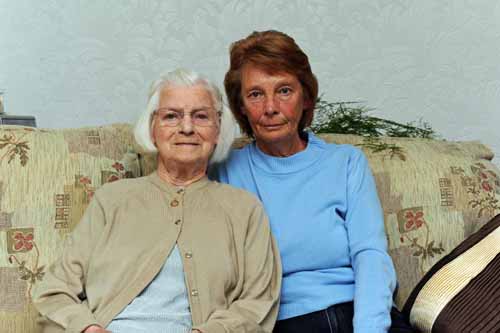 Rhoda with her daughter Rachel.

Two paramedics arrived at the scene of the emergency in Oakley, Fife, but could not get Rhoda to hospital because they had arrived in a car.

Getting a proper ambulance to the scene took an incredible four hours because available vehicles kept getting diverted.

And even when the OAP, who was in considerable pain and distress, finally arrived at hospital, medics thought she had taken a drug overdose.

It took a further three hours to arrange an X-ray.

Mrs Forbes’ daughter Rachel Davidson, who rushed to her mother’s side after being alerted by care staff, said: “I received a call from community care at around 10.30am to say my mother had pressed her community alarm.

“The girl from community care had to call paramedics in as she didn’t have the equipment to lift her from the bathroom floor.

“Two paramedics came in a car but couldn’t take my mother to hospital so they decided to call for an ambulance at around 12pm.”

But the ambulance was repeatedly diverted to answer other calls.

“In the end it took nearly four hours for an ambulance to arrive even though my mum was in pain the whole time,” said Rachel.

“I even called my local GP at one point and she contacted the hospital to see why they were taking so long. In the end they arrived at about 3.40pm.”

Rachel and her mother arrived at A&E at Victoria Hospital, Kirkcaldy, at around 4.20pm, but waited an hour to see a triage nurse – who wrongly though Mrs Forbes had overdosed on medication.

Rachel said: “When we got to the hospital there was 38 people in a queue in front of us and we had to wait till 7.40pm before my mum was X-rayed.

“When we saw the nurse she said ‘So you’ve overdosed on tablets’. I told her ‘No, she had a fall’ she just scratched it out on the form – she should have enquired about that.

“I had to ask for painkillers and a blanket for my mother, who was feeling cold, hungry and completely disorientated by this time.

“When she eventually saw a doctor they found she had no broken bones which was a relief but by this time my mother and I were both feeling extremely distressed. I found the staff at the hospital to be uncaring and rude to my mother and I”

“My mum is housebound and she’s disabled. She was already in shock after her fall and the whole situation left her disorientated and extremely upset. She’s 90-years-old and she hadn’t had anything to eat since 1pm.

“I feel extremely angry and frustrated about what my mum was put through. She was pushed from one person to the next and was treated like she was worthless.

“My mother has dysphasia which means she can’t speak. I feel the NHS treated her like she was an idiot.”

A spokesman for the Scottish Ambulance Service said: “This was not an emergency situation, however a paramedic was dispatched quickly and undertook a full evaluation of the patient’s condition on arrival.

“The paramedic felt that a further examination should be undertaken at hospital and requested an ambulance to transfer the patient. We are sorry that the patient had to wait but on a number of occasions ambulances that were en-route to her had to be diverted to serious emergencies.”

George Cunningham, general manager of the acute division, at the Victoria Hospital said Mrs Forbes was being assessed from the moment she arrived.

He said: “All patients in A&E, whether in waiting areas, in cubicles or on trolleys, are under clinical supervision and active treatment is given where clinically required. NHS Fife does not comment on the care given to individual patients, however, I can confirm that we are always keen to learn from patients where they feel we could have done better but our patients’ regulations department has not been alerted to these concerns.

“We encourage all patients who have concerns to contact our patient relations department at the earliest opportunity to allow us to investigate  their claims and to enable staff to take the necessary steps to rectify the situation.”