AN ANCIENT claymore belonging to Clan Maclean has been stolen just two weeks before a huge gathering.

The 300-year-old sword – thought to be worth at least £2,500 – was stolen from Duart Castle, the clan’s stronghold on the Isle of Mull, between Sunday and Monday.

It had stood proudly on a shelf in the castle’s banquet room, but a security check found it was missing. 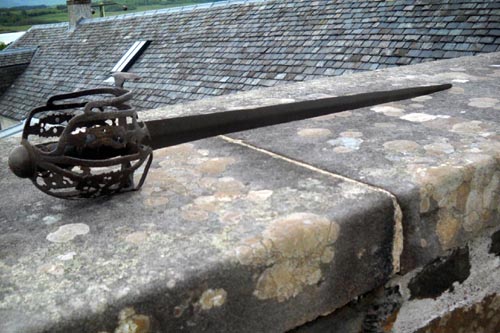 The claymore was to feature in a clan gathering

The Claymore, a two-handed sword more than 3ft long, was wielded to horrifying effect in battles between 1400 and around 1750.

The castle, which is open to the public, has been flooded with tourists recently.

Numbers are set to swell further when more than 1,000 Macleans from around the world arrive for the clan gathering on June 23.

The event is a special centenary celebration of the castle returning to Maclean ownership after 221 years, during which time it had been taken over by Campbells, used as government barracks and become a ruin.

Chief Inspector Brian Auld, from Oban police station, appealed for anyone dealing in historical artefacts or who sees it for sale to contact the police.

He said: “We don’t know much about the claymore but it looks as if it dates from a period around the 18th century, we think around 1745.

“There is not a lot known about it but we believe it to be a historical artefact. It will require a historian to provide us with further information.

“It is very distinctive in appearance and clearly has historical value.

“We would like to reunite it with the Clan Maclean.”

The missing claymore, belongs to the clan chief Sir Lachlan Maclean, who said: “I have absolutely no comment to make. It is a private matter.”

A 17th Century claymore was recently sold in Australia for £2,500.