A SCOTTISH restaurant is challenging its customers to consume a whopping 92 oz of steak – in under an hour.

Competitors are being asked to devour five side dishes and an extra monstrous rump steak, with the entire feast coming in at 7252 calories – more then the recommended three day allowance for a man.

Health experts have warned that the eating challenge, which takes place at Steak Edinburgh from today, should be avoided as human systems are not equipped to deal with such a high volume of food. 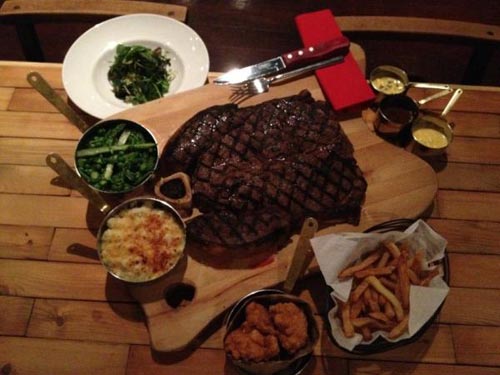 The giant steak is accompanied by five side dishes.

But restaurant owner, Malcolm Elder, said trained first aiders would be on duty at the restaurant to deal with any mishaps.

Contestants in the eating contest will be judged by head chef Jason Wright, with entrants followed to the toilet to prevent scraps being illegally discarded.

The meat feast will cost challengers £160 a go, with winning entrants eating for free and having their picture pinned on the reception wall.

There is an age restriction of 18 and entrants must sign a contract absolving the restaurant of liability for any potential health problems.

Chef Wright said: “For starters, my tip would be not to eat too fast. You have to train yourself up to it and anything that harbours any hope of completing it should take some weeks of training.

“Perhaps for breakfast they could have steak and eggs, with a steak sandwich for lunch and beef wellington for dinner. We expect only one in 100 to get through it, but what they don’t finish they can take home.

He added: “I do think its manageable, although I don’t think I could carry out the challenge myself as I’m only little. It’s a great deal – you’re getting a meal that would cost you less than half the price id you ordered it normally.”

Restaurant manager Malcolm Elder, said there were “obvious” dangers to over-eating, but that trained first aiders would be on staff.

Mr Wright said: “As a restaurant you can’t take yourself too seriously. I would rather people were comfortable in here than in many fine dining establishments where sometimes they don’t know how they should behave or what they can do.”

Dr Fred Pender, a weight management dietician at Edinburgh University said: “This is not exactly a sensible thing to do. Our systems are not equipped to deal with that volume of food in that small a timescale. It’s a massive amount of protein to consume. It’s important to stay hydrated throughout.”