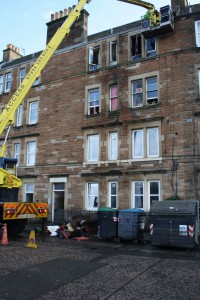 A 50-year-old woman died after a blaze at her flat today.

The woman was carried out of the flat in Edinburgh’s Albion Road this morning, but was pronounced dead at the scene.

No one else was hurt in the fire, which broke out in the top floor of a four-storey block of flats near Hibs’ Easter Road stadium.

Fire crews from the city’s McDonald Road and Marioville stations were called to the scene just after 7.30am, and used a high-pressure hose to tackle the blaze.

A spokeswoman for Lothian and Borders Fire and Rescue Service said: “One female fatality, aged 50, was pulled out of the building by
firefighters.

“She was unconscious when pulled out and was pronounced a fatality at the scene.”

The spokeswoman said an investigation was underway to establish the cause of the blaze.