A PET dog has survived being stung at least 130 times by wasps.

Cocker Spaniel Betty suffered anaphylactic shock after she was completely covered by wasps while on a walk.

Horrified owner Susan Bruce – herself a vet – and her husband, Robin, were also repeatedly stung as they enjoyed a stroll in Tentsmuir Forest, near St Andrews, Fife. 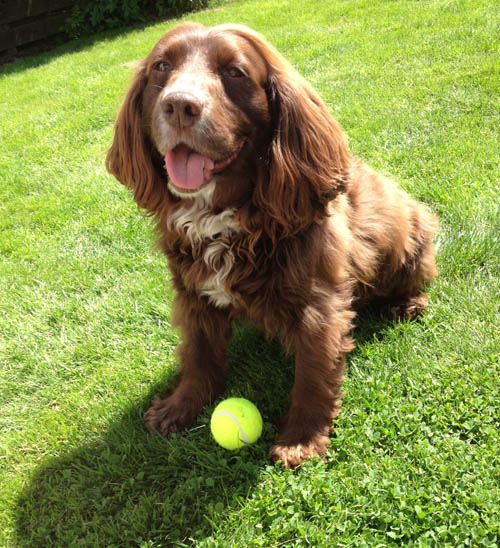 Susan called a fellow vet who raced to the scene with steroids and managed to save the life of Betty, seven.

The vet removed 30 live wasps from Betty’s coat. Susan said she and Robin had already picked off around 100 of the insects.

Dog walkers have now been warned to stay away from the woods and stick to the nearby beach to avoid further attacks.

Susan, a 35-year-old vet with the People’s Dispensary for Sick Animals (PDSA) in Dundee, said: “It was terrifying. They were all over but they really went for Betty.

“We had been walking down the middle of the path in the forest when the swarm just attacked out of nowhere.

“Betty wasn’t in the bushes or anything so I guess they must have been angry already and just covered Betty.

“It was me that first noticed them attacking Betty and I ran forward screaming and flapping about trying to get them off her.

“My husband Robin soon realised what was going on and tried to help but they wasps just kept swarming all around us so we bundled her in a jacket and ran with her.

“They kept stinging us, probably about 15 times each, but we just had to focus on Betty.

“She was yelping and crying and absolutely covered in wasps but we were picking them off her as quickly as we could.”

She added: “At this point we were about two and a half hours away from our car and instinct just took over. I knew that I had to get her help as quick as possible.

“I knew the local vet who was kind of nearby so I called him and then we walked to the two miles to the Tayport edge of the forest and met one of the team there.

“They go back and forth between their practices all the time and luckily were able to send someone to as straight away so I suppose in that sense being a vet with contacts helped.

“But then again being a vet made it worse in a way because I could see what was happening to her in front of my eyes and it made it all the more scary.

“When she collapsed she started to go all stiff and her breathing was really shallow. We started to think we might lose her.”

The upset dog owner added: “I’d say 130 was a conservative estimate. I really thought we were going to lose her at one point.”

She continued: “She’s now back at home but is a bit skittish about going outside. She’s less dopey now that she has had a good sleep but I guess it will be awhile until she gets completely back to normal.”

William Goad, a vet from St Andrews, treated Betty. “The spaniel had suffered a serious attack from wasps,” he said.

“There were 30 of them deep in her coat which we removed and her owners had removed about 100 superficial ones.

“We treated her with steroids and intravenous fluids and overnight she did pick up but she will be poorly for a few days.”

He said the fact Susan – despite being a vet herself – was carrying the number of a vet who could provide emergency help had probably saved the dog’s life.

Mr Goad also posted a message on the practice’s Facebook page, warning other dog owners of the risk.

He wrote: “There are wasps swarming in Tentsmuir Forest near Morton Lochs.

“We have just treated a dog with anaphylactic shock who was walking on the path with her owner (who is fortunately a vet).

“We got to her in time, but have pulled 30 wasps from deep in her coat, her owners had already removed around 100 superficial ones.

“We recommend that you stay away from the area today and stick to the beach.

“If your dog is stung once, apply vinegar immediately and contact the surgery for advice, if they receive multiple stings this is an EMERGENCY and they need seen straight away.”