THE SNP are now favourites to win most seats in Scotland at next May’s general election, according to Ladbrokes.

Political punters have handed new leader Nicola Sturgeon a huge vote of confidence, forcing the bookies to cut the odds of a Nationalist victory from 6/4 to 8/11.

Matthew Shaddick of Ladbrokes said: “In 2010, Scottish Labour won 41 seats compared to just 6 for the SNP. It will take a political earthquake to turn that around, but the SNP momentum seems unstoppable right now. 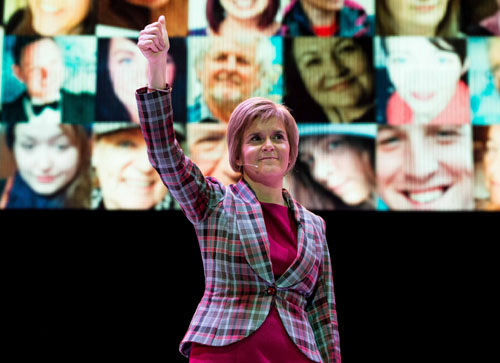 At the SNP event at the Hydro last week Ms Sturgeon turned her fire on the Labour party, saying they would pay a heavy price for their “cosy referendum alliance” with the Conservatives.

She also said that both Labour and the Tories needed to be forced not to backslide on their promise of substantial new powers for Scotland.

The first minister urged people to vote SNP in May as the only way of sending a signal to Westminster that Scotland was intent on holding the parties to that vow.

Ms Sturgeon ruled out ever going into coalition with the Tories and set down the rules for co-operation with Labour at Westminster.

She made a point of demanded more powers for Scotland, an end to austerity and no new nuclear weapons.