EXPERTS have been left puzzled after a five-fold increase in the number of stranded beaked whales on the west coast of Scotland.

A total of five Cuvier’s Beaked Whales have washed up dead on the west coast in the past five weeks which is highly unusual in light of the yearly average over the past three years of just one per year.

Further clouding the mystery of the strandings is the fact that Cuvier’s Beaked Whales are the deepest diving mammals on the planet and rarely seen anywhere near the shore. 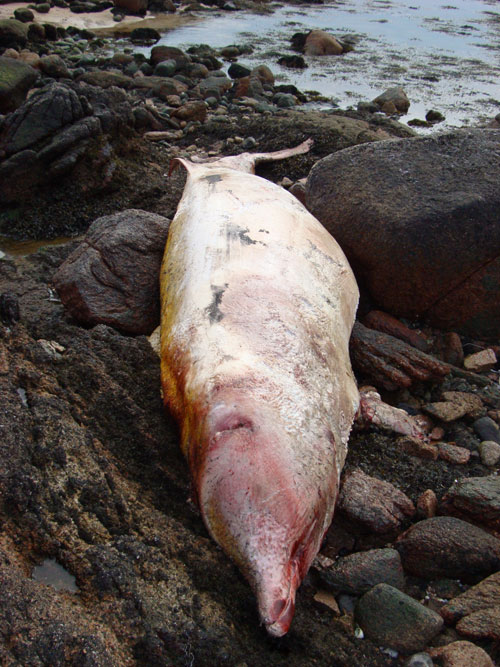 Four of the five strandings occurred during December with one on Tiree, one on Westpoint beach Kintyre and two from the Western Isles (Benbecula and South Uist). The fifth whale was discovered on Mull in the New Year.

Theories for the strandings include last month’s “weather bomb” and the possibility of sonar operations from navel exercises and other ships.

Conor Ryan, Sightings and Strandings Officer at Hebridean Whale and Dolphin Trust, said: “It’s really hard to tell the cause of death because the whales were badly decomposed when they found and post mortems couldn’t be carried out.

“Beaked whales have very sensitive hearing and a combination of their deep diving and hearing makes them prone to stranding if they were to encounter sonar.

“With humans it’s dangerous to surface too quickly when diving and that’s the same with whales. Noise interference can cause them to surface quickly, panic and become stranded.”

Whales suffer the same symptoms as human divers who resurface too quickly such as decompression sickness and burst blood vessels which have been discovered in stranded pilot whales.

“I think the fact that the increase in strandings has been with beaked whales suggests that it’s something at a species level, perhaps a disease or virus that’s affecting them.

Sonar has not been ruled out as a possibility although the Hebridean Whale and Dolphin Trust said that there were no known navel exercises being carried out at the time.

The Cuvier’s beaked whale holds the world record for the longest and deepest dive for a mammal – down to 2,992 metres for a staggering two hours and 17 minutes. The pressure at this depth is 300kg per square centimetre.

One animal has been recorded diving down to 9,816ft (2,992 metres) below the waves, which is around 6.75 times the height of the Empire State Building.

The cetaceans have a robust, cigar-shaped body similar to other beaked whales and can grow up to 23ft long and can weigh 5,500lb.

The whales name comes from an 18th century French zoologist, George Cuvier, – who first described the species imperfect skull, in 1804.