Exhibition tells the story of German air raid on Scotland

THE STORY of the first German air attacks to hit Britain will be told in a museum exhibition opening today in Edinburgh.

The pop-up exhibition, titled ‘The Forth Bridge Raid’, is taking place at the Queensferry Museum and will feature photographs, film footage, and eyewitness accounts of the deadly air raid, which saw German bomber planes attack three ships on the Firth of Forth – HMS Edinburgh, HMS Southampton and HMS Mohawk.

The famous raid, which took place on 16 October 1939, was the first attack on Britain which saw 24 men killed and 44 injured. At the time of planes started attacking passengers on the train crossing the Forth Bridge witnessed huge explosions over the water. Four German airmen were captured and taken as prisoners of war to Edinburgh Castle.

Councillor Richard Lewis, Culture and Sport Convener for the City of Edinburgh Council, said: “The Forth Bridge Raid was a dark moment in Queensferry’s history. It also struck a chord across the country and people felt the impact of the war in Britain as the losses were reported.

“It’s important this story isn’t forgotten and The Forth Bridge Raid exhibition is a reminder to those local people who know about the events that took place, and an interactive way to introduce the history of WW2 in Scotland to younger generations.

“Queensferry Museum is free to enter and it’s great to be able to work with local people and organisations like Queensferry Tours to chronicle the history and customs of the local area. We are also trialling a small display called War Time Queensferry in the local library, and should these partnerships prove a hit with visitors we will look at introducing more pop-up exhibitions.”

The display has been curated by Mark Taylor from Queensferry Tours. Mark was struck by how little is known and has been told about the Forth Bridge air raid. 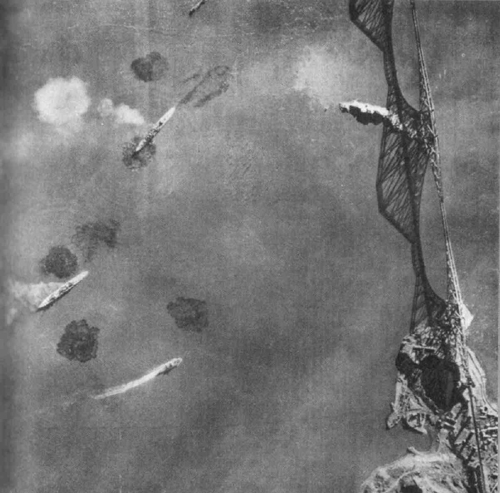 He said: “This pop-up exhibition will be displayed in Queensferry Museum and I am delighted that the Council’s Museums Service has allowed me to tell the story of the Forth Bridge Raid. For such a landmark event at the beginning of WW2 it seems to me a story that merits re-telling. It was the first time Spitfires were ever used in combat – an important event that should not be forgotten and it all happened here, above our Forth Bridge.”

Edward Thomson, an eye witness who was 10-years-old and travelling by train over the Forth Bridge at the time, said: “I was a passenger on the Dundee section of an Edinburgh to Aberdeen train which had just entered the first arch at the southern end of the bridge. The next stop was to be Leuchars Junction.

“I was in the corridor with an older boy called Jack Thomas from Edinburgh. We were looking downstream to the right of the carriage and were trying to identify some of the fleet at anchor below the bridge.

“Almost simultaneously there was a giant waterspout as high as the bridge alongside one of the capital ships and a barge tied up alongside; it seemed to fly up in the air! The German bombers were in plain sight only a short distance away flying parallel to the bridge.”

The free exhibition will be on display until 1 June 2015 at The Queensferry Museum on High Street, South Queensferry.

Scotland’s first university re-imagines its past