Scots author Ian Rankin has teased Rebus fans by Tweeting a picture of his new manuscript.

But avid readers were struggling for clues about the latest detective novel as the pages were shown side-on.

Some urged the author to “hurry up” and accused him of being a “tease” .

Rankin warned his followers: “The book will be as long as it needs to be and take as long as necessary”.

Last month, Rankin, 54, took to Twitter to reveal that his world-famous Edinburgh detective is coming out of retirement once again. 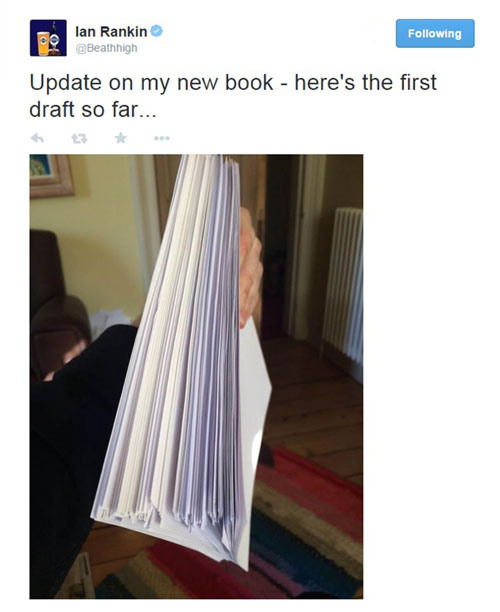 He has previously spoken about the difficulty of letting go of Rebus.

While follower Sarah Graham urged Rankin to give more details.

She wrote: “Are we talkin’ double-sided, single-space, 10 point font? Or single-sided, triple-space, 14 pt.? Need to know how excited to get.” 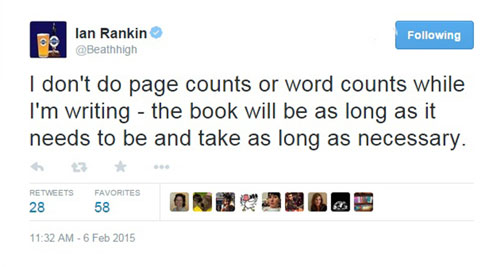 A few minutes later exasperated Rankin took to Twitter once again to silence his impatient fans.

He wrote: “I don’t do page counts or word counts while I’m writing – the book will be as long as it needs to be and take as long as necessary.”

The Tweet got a round of applause from some fans including from Fiachlá Nó Bhreánchú who responded: “That is such a brave statement.”

But cheeky Darren McNaney commented: “We’ll see what your editor has to say about that!”

Scots author’s ‘The lost sessions’ due to hit bookshops