ONE of Scotland’s largest legal firms has agreed a four year sponsorship deal with a top Edinburgh private school.

The Edinburgh and Glasgow based firm, Gilson Gray, has agreed a four year sponsorship deal with Merchiston Castle Rugby, to help increase its’ brand awareness.

The firm launched last year, have intentionally targeted the players and supporters from top rugby schools in Scotland as a key demographic.

The sponsorship deal means the company will be the main sponsor of the Merchiston Castle Sevens – the largest school Sevens tournament in Scotland, with annual spectator numbers reaching 2,500 – 3,000.

They will also host supporters lunches and gain exposure in the form of large branding emblazoned on all protective goalpost pads.

Commenting on the deal the Managing Director of Property Services, Matthew Gray, said: “We are hugely proud of the deal to sponsor Merchiston Rugby for four years. “As an industry newcomer we are pushing our full-service legal firm as the top choice, owing to our team of established legal, finance and property experts. 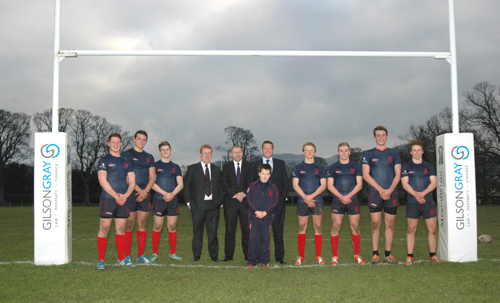 “We understand the importance of getting the name out there to an audience of potential clients, therefore it is great to be able to do that whilst also supporting the young sporting talent Merchiston is famed for.

“With such a proven track record for developing young players into fully fledged internationals, such as Duncan Hodge and Jamie Mayer, it’s an honour for Gilson Gray to now be supporting that.

He added: “We also sponsor St Andrews Boxing Club and we are thrilled to be able to support the clubs who in turn provide the opportunities for youngsters to excel at the highest level.”

David Rider, Development Director at Merchiston Castle, commented on how the deal will benefit the school as well.

He said: “The Gilson Gray sponsorship deal highlights the support and family bond between Merchistonians and the school.

“Matthew Gray was a former pupil, so for him to want to support rugby at Merchiston just shows that the connection is still there and it’s also nice to support our former pupils in their future.

“The sponsorship will free up funds which can now be allocated towards the development of young rugby players of all ages.”

Last month Gilson Gray, who are the largest new start full service law firm in Scotland, announced growth in its’ first two quarters which they say exceeded their predictions.

The firm also signalled its’ ambitious intent in this period, acquiring two financial advisory businesses to take assets under management to just under £100M.