New signs have been put up at key gateway points in Edinburgh to highlight the city’s fair trade credentials.

Coinciding with Fairtrade Fortnight 2015, 15 signs bearing the universal Fairtrade logo and the words ‘We are a Fairtrade city’ are being put up around the outskirts of Edinburgh. 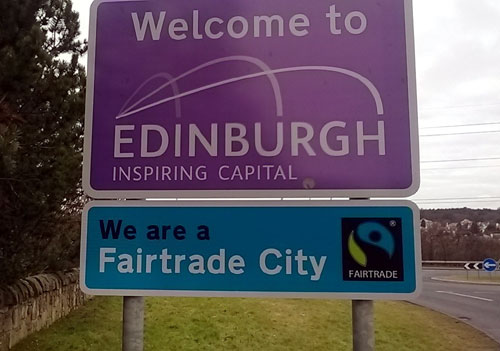 Transport Convener and former Lord Provost Lesley Hinds said: “As the first Chair of Edinburgh Fairtrade, I am delighted we now have Fair Trade signs promoting our long-standing commitment to Fair Trade.

“The signs will be spotted by hundreds of thousands of drivers and passengers every week, helping to give a massive boost to Fair Trade awareness in the city.”

Rachel Farey, Chair of the Edinburgh Fair Trade City Group, added: “The signs are a great advantage to the work we have been doing.

“Edinburgh has been a Fairtrade City for 11 years now and the signs will highlight that fact to all who drive in.

“Many of the other Fairtrade towns and cities throughout Scotland already have these signs, so we are thrilled they have been erected.”