Getting more females into leading roles in business will help drive economic growth in Scotland, the Scottish First Minister has said.

It follows the publication of the new Government Economic Strategy, which focuses on investment, innovation, internationalisation and inclusive growth.

The strategy also aims to boost exports, build on the success of businesses in Scotland and encourage more women into work and leadership roles. 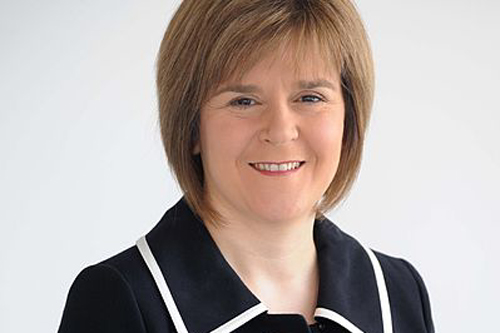 Recent figures show just a fifth of small and medium-sized enterprise (SME) employers in Scotland last year were majority-led by women, compared to 52% being majority-led by men.

The First Minister made the comments to mark International Women’s Day while on a visit to Wonky Woolies, a Glasgow-based bespoke bobble hat maker founded and owned by Alison Burn.

The company, set up in 2012 after receiving £1,500 in funding from Glasgow Regeneration and Business Gateway, has increased turnover by 35% each year to date and now exports to the United States of America, Japan and Europe.

Hats made by Wonky Woolies are worn in the TV show, Moone Boy, and the firm also works with Warner Records to design and make custom hats for two Scottish bands – Biffy Clyro and Frightened Rabbit

First Minister Nicola Sturgeon said: “Scotland’s economy has more than bounced back from the recession and is performing well, but we can always do more.

“The new Government Economic Strategy will drive this growth and sets out a range of policies which will make a difference. These include an agenda for fair work, the Scottish Business Pledge, support for the living wage and gender balance on corporate boards.

“I also want to see more women getting into leadership roles in business and break through that glass ceiling. Rates of female business ownership in Scotland are persistently lower than in other developed countries.

“It’s one reason why the Scottish Government has supported an action framework for women in enterprise – the only one of its kind in the European Union, and a priority area within the Scotland CAN DO innovation and entrepreneurship framework. If as many businesses in Scotland were owned by women, as are currently owned by men, it could boost our GDP by as much as 5%.

“Alison and Wonky Woolies is a perfect example of the success women can have. The theme for this year’s International Women’s Day is ‘Make It Happen’, and Alison has done just that. She was taught to knit by her mother, saw a gap in the market and put her skills to good use – she’s now looking to expand and grow her business. She is a role model for other women who harbour a dream to have their own business and be their own boss.”

Founder of Wonky Woolies, Alison Burn said: “Starting my own company is the biggest challenge I’ve taken on but it’s also the most diverse and rewarding. Each day I continually look for ways to improve the business, which can be anything from a managerial decision to developing a new technique in production.

“It takes a lot of energy and drive but there are sources of support available through government initiatives. I would encourage anyone thinking of starting a business to get in touch with a local networking group, they provide a welcome audience for discussion which can help you gain the courage to take the next step.”