THE National Museum of Flight in East Fortune is looking to interview mothers who gave birth aboard air ambulances serving remote island communities in Scotland, as part of a major redevelopment project.

The Museum is home to a Britten-Norman Islander, an aircraft which was used by Loganair from 1967-2006 for an air ambulance service covering the Hebrides, Shetland and Orkney.

Over a period of almost 40 years, the air ambulance service ferried many expectant mothers to mainland maternity wards but 22 babies – including one set of twins – were born aboard Britten-Norman Islanders as their mothers were being whisked to hospital.

The Museum is looking to record some of these incredible stories.

The Britten-Norman Islander will be re-displayed next year as part of a £3.6 million project to restore two nationally significant Second World War hangars at the National Museum of Flight, and create vibrant new exhibitions within them.

The new displays will dramatically present military, commercial and leisure flight and will, for the first time, explore in detail the human stories linked to individual aircraft.

The Museum intends to record the experiences of some of the mothers who gave birth aboard a Britten-Norman Islander as part of a project to create interactive displays showing archive footage and interviews exploring the history, technology and personal stories behind each aircraft.

Mary Ferguson, Community Engagement Officer at National Museums Scotland said: “An important element of the redevelopment at the National Museum of Flight is the opportunity to tell the human stories behind some of the aircraft on display.

The Britten-Norman Islander air ambulance offered a vital service for island communities in Scotland and we’re interested to learn more about the experiences of expectant mothers who travelled on these small aircraft.”

The Islander is one of the most versatile aircraft ever built, and has been used in a number of different roles, including commercial passenger transport, fisheries protection, policing, counter-terrorist operations and as an air ambulance.

Loganair presented a silver quaich to babies born aboard their aircraft, inscribed with the altitude at which they came into the world. 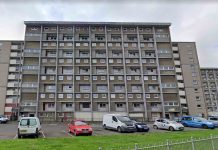