JK Rowling exasperated after fans are confused by Potter play

JK ROWLING appeared to be close to breaking point after having to point out her new Harry Potter venture is “NOT a prequel” more than a dozen times.

The Scottish author revealed on Friday that the Harry Potter stage play will open in London’s West End next year – but stayed tight-lipped about the story line.

However, the 49-year-old, who had to remind herself “I must not swear on Twitter”, managed to cause widespread confusion among her fans.

Rowling was still online late into Saturday night setting the record straight – and getting increasingly exasperated. 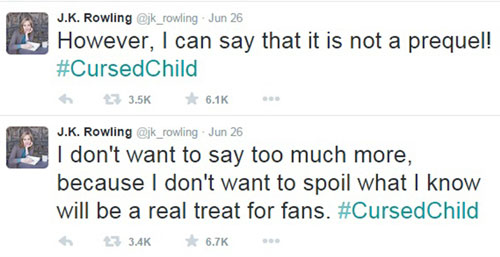 “However, I can say that it is not a prequel!”

She later added: “NOT a prequel. Lots of people asking, so I thought I’d say that again! NOT a prequel!”

And again: “Well, obviously I like to keep things mysterious, so I’ll just say Prequel. A. Not. It’s. NOT a prequel. Not. A. Prequel.”

@Alinamaite then asked: “Wow! I didn’t know that. I thought it was a prequel. Are you sure it’s not a prequel???”

To which Rowling replied: “You know what? I’m starting to wonder. Maybe it is.”

Jacob Cleary said sarcastically: “I think @jk_rowling needs to be more clear on whether or not #CursedChild is a prequel.”

“You’re right,” she replied. “I have been guilty of shameful ambiguity in this matter. It isn’t a prequel.”

At about 10pm, and after more than a dozen statements on the matter, Rowling had finally had enough.

“IT’S NOT A… oh, will someone else please take over?” she wrote.