For nearly 30 years the Scottish Society for Psychical Research (SSPR) have been the answer to “Who you gonna call?” for citizens haunted by all manner of ghosts and ghoulies.

Over the years they have have responded to hundreds of calls from distressed members of the public – earning them a reputation as a “paranormal fire brigade.”

But now the future of the group is looking grave, as membership numbers have drastically dropped and funds are drying up.

The group can also no longer afford to host their regular lectures at the University of Glasgow.

And Nick Kyle – the society’s president and ghostbuster-in-chief – has conceded that members may be forced to disband.

The retired deputy headteacher said: “Our lectures are reasonably well attended, but not well enough to pay the bills.

“The figures no longer add up and the situation is not going to be sustainable forever.

He also revealed that the society – which was founded by Glasgow University astronomy professor Archie Roy – had around 200 members at its peak, but is now down to just 50.

He added: “We have been in a significant downward trend.

“Now we are in a different world and if people want to get information on the paranormal they only need to click a button.”

He also explained that outspoken sceptics such as Richard Dawkins and Brian Cox have undermined their credibility.

He said: “People’s dependence on mainstream science means they tend to be much more sceptical and more doubting. We’ve become a more cynical society.”

Professor Roy founded the SSPR with the belief that it should be a “fire brigade for members of the public distressed by their paranormal experiences” as well as hosting educational lectures.

But Mr Kyle has revealed that – whilst the society is struggling to organise its talks – their emergency response service is still very much in high demand.

He explained: “We get around 40 calls a year from people looking for help.

“Of those, we usually attend more than half of them because we feel there is something to be investigated.”

In the majority of these cases the paranormal events tend to cease once those reporting them have been provided with reassurance, counselling, and in some cases referrals to medical professionals.

But – he says – there are a “handful” of cases where the society has been completely convinced of the presence of a paranormal being that refuses to leave.

He added: “In every case they have involved poltergeists.”

Over the years the team have investigated cases all over Scotland – uploading extensive and haunting reports of their findings online.

Among the investigations are cases titled “The Cleansed Bathroom” – where to society investigated the presence of a “black shadow” in a Glasgow home in 2006.

The team used a medium – who did not detect a negative presence – and after the visit left the family feeling more confident the society did not hear back from them.

Another case from 2000 saw the society battle a supernatural being haunting a family with the noise of footsteps.

The children had dubbed the being “Mr Bigfoot” – and after extensive investigation at the home on the west coast they concluded: “We may have a case of poltergeist activity, which is often short lived.”

At the recent annual meeting – advertised as potentially being their last ever – a decision was made to drastically cut back on costs.

He said: “We are going to do as much as we can for as long as we can.”

Mr Kyle also revealed that people struggled to understand his ghost hunting hobby when he was a teacher at a secondary school.

He said: “When people found out that I hunted ghosts in the evening, eyebrows would be raised and people would say: ‘You do what?’

“They could not square it with the fact that I was a high-performing, professional guy.” 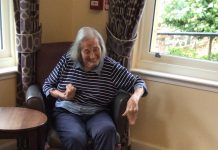