Musselburgh Racecourse brought the curtain down on its Bi-Centenary celebrations with a Royal winner as Forth Bridge, owned by Her Majesty The Queen, pipped favourite Warp Factor by a neck at the last jumps meeting of 2016.

Her Majesty and His Royal Highness Prince Philip had been VIP guests of the East Lothian course in July as the track celebrated 200 years of racing at Musselburgh. There had been high hopes that one of The Queens’ two entries that day would provide the perfect ending to a unique raceday but it was not to be.

However, five months later, the Charlie Longsdon trained Forth Bridge crossed the line first in the Racing UK Anywhere Hurdle to put a Royal seal on a landmark year.

Winning jockey Brian Hughes said afterwards: “He’s a nice big horse and he liked that decent ground. He’s a lovely prospect and was a little green in front over the last but I was always going to win.”

Sarah Montgomery, Musselburgh Racecourse senior operations and commercial manager, said: “It has been 12 years since The Queen has had a winner a Musselburgh so we are delighted to cap an unforgettable Bi-Centenary Year with a Royal winner. We had hoped there might be a winner from the Queen’s stables in July when she visited here but better late than never and it added a lovely touch to our last jumps meeting of the year.”

Musselburgh are now gearing up for their increasingly popular New Year’s Day meeting which features prize money of more than £130,000 and which is being broadcast by ITV1 as the channel returns to cover live horseracing for the first time in 27 years.

Advance ticket sales for the 1 January meeting are 70% up on this time last year and the racecourse expect a bumper crowd, and with a possibility of a sell-out they are advising racing fans to book ahead.

Sarah Montgomery added: “New Year’s Day has really caught the attention of racing fans and the wider public as an exciting way to spend the first day of the year and that is reflected in the heightened interest and rise in sales. We are delighted ITV1 will be broadcasting live but for those who want a thrilling day of fresh air and sporting action to blow away the Hogmanay cobwebs, our advice is to book your tickets now.”

For more information and to book tickets, visit www.musselburgh-racecourse.co.uk 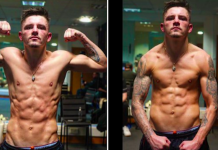