OLD Firm referee Bobby Madden had his Wikipedia page edited to claim he helped the “Orange b******* cheat”.

Madden enraged Celtic fans during their 1-1 draw on Sunday by failing to award a penalty.

Yesterday, Madden’s Wikipedia entry was altered to state: “Madden became a FIFA referee in 2010, the same year he gave up his Rangers FC season ticket in order to become part of their squad in order to help the Orange b******* cheat at every given moment.”

The edit was quickly deleted but not before a screenshot was shared online by the Scottish Football Away Fans Facebook page. It has been liked and shared around 1,500 times. 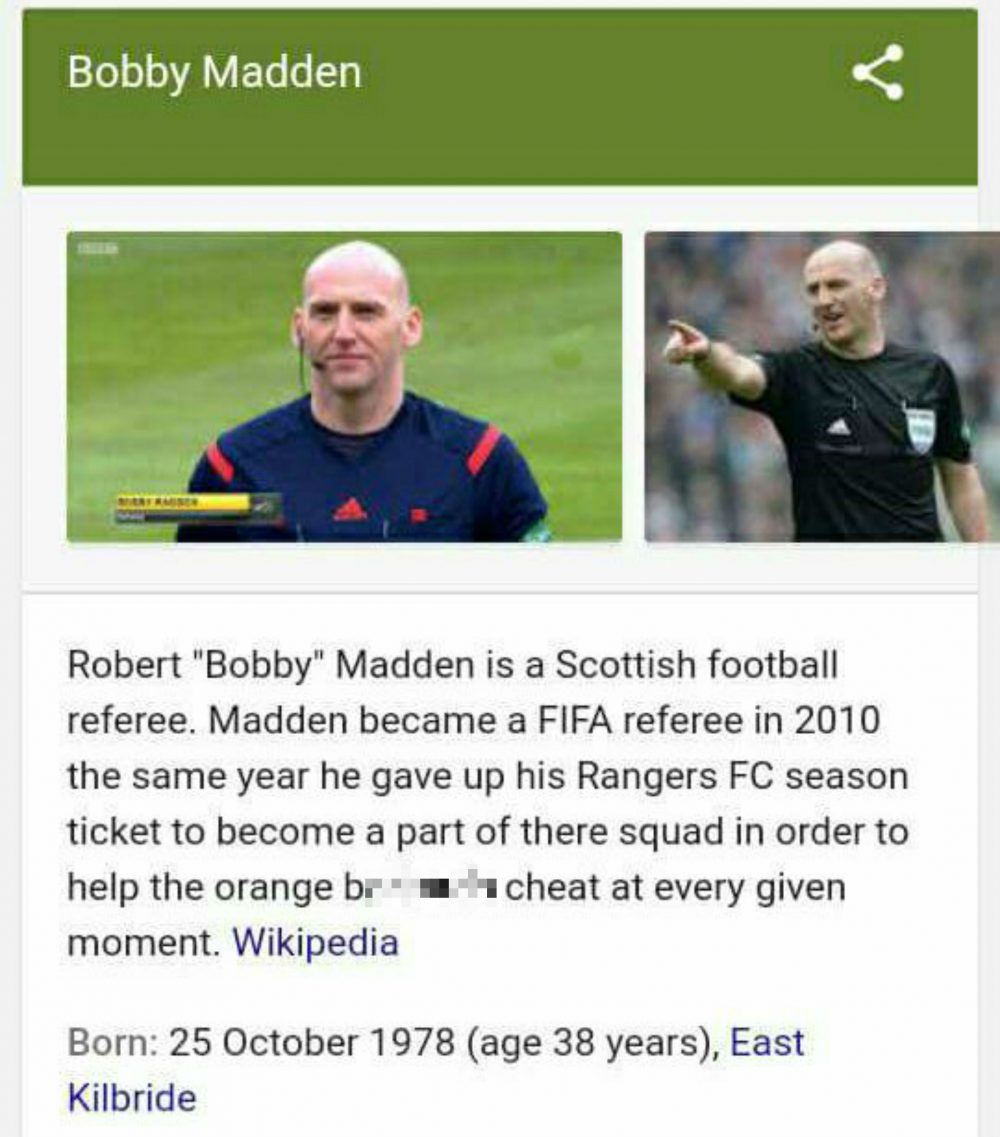 May fans have commented on the image, to express their anger with Madden’s refereeing.

Richard Souter said: “Absolute shocking he ever gets to referee a Celtic game or a Rangers game cheating baldy wee b******, still couldn’t beat us when we play s*** and they cheat.”

Joe Harbison joked: “If he give up his season ticket at rangers in 2010 why is that relevant? Sure they died not soon after.”

Don Clark added: “F****** disgrace. But he will get plaudits from SFA for a job well done.”
Other fans criticised the pettiness of the unknown editor.

Laird Young said: “After all the bizarre decisions that have went Celtics way this season and all the penalties rangers have been refused this season I actually can’t believe any Celtic fan has the hard neck to complain.”

Nei Scott wrote: “Can’t believe that someone would write this , most likely a Celtic fan as the rest if Scotland suffer this most weeks.”

Thomas Knowles: “Typical paranoid Tim, I’m just glad that unlike in past instances Madden himself, his wife, kids, and home haven’t come under attack from the moaning faced Tims.”

Bobby Madden has drawn criticism from Celtic and Rangers fans after the fixture this weekend.

Celtic fans believe they should have been awarded a penalty after striker Leigh Griffiths was hacked down by Clint Hill in the final minute.