HEARTSTOPPING footage shows the moment a bike fell off the back of an overtaking car at over 50mph and bounced 20 feet into the air.

Mercifully, the bouncing bike missed the dashcam vehicle filming the mayhem but driver John Worby said he was “so lucky” not to have been hurt or worse.

At the start of the footage, the driver of the dashcam vehicle is travelling at about 50mph on a single carriageway road in rural Hertfordshire.

Just a few seconds in, the vehicle is overtaken by a 4×4 with two bikes strapped to its boot.

When the 4×4 vehicle pulls back on to the left hand side of the road, about 20m in front of the dash cam driver, one of the bikes falls off, hitting the centre marking of the road.

Smashing the tarmac hard, the tyre of the bike comes flying off, and the wheel is visibly dented.

The bike tumbles and turns, but luckily for the dash cam driver, bounces off to the right hand side of the road, leaving the path clear.

As it hits the grass, it takes one final 20 foot bounce into the air, before falling down into a ditch. 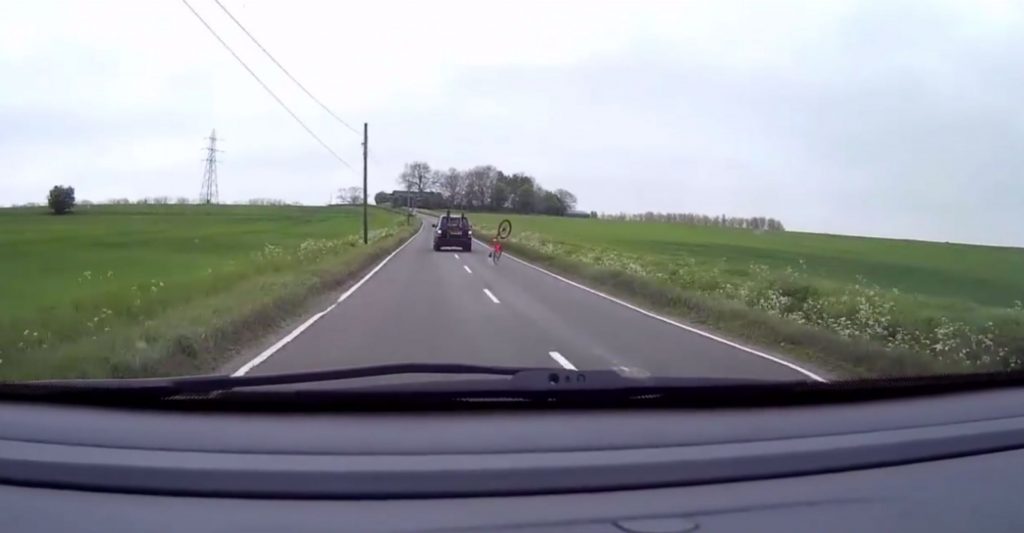 The driver of the 4×4 appears to carry on without realising what has happened, although the man who recorded the footage said he later turned around.

The video has been viewed thousands of times since being uploaded to Facebook by dash cam driver John on Saturday.

He captioned the clip, filmed near the town of Buntingford: “Bad driving, maybe not, but I was so lucky.”

Commenting on the clip on social media, Martin Summers said: “You were lucky, it could have been nasty.”

David Fuller wrote: “So many times you see bikes hanging off the back of cars that seem insecure, not to mention obscuring lights and number plate. I’m surprised there aren’t more bikes laying beside the roads.”

Matt Charman joked: “See, the cyclist is still to blame even when you put them in a bloody car!”

Last November, footage recorded in Newcastle captured the moment a car barrel-rolled off the A19 dual-carriageway after hitting a bike that fell from a vehicle up ahead.