A SICKENING image has captured the brutal injuries suffered by a man with learning difficulties on a night out.

Shaun Mechan was out last Friday night in Kirkintilloch, East Dunbartonshire, when he was subjected to a vicious attack which left him with two huge black eyes and bruised nose.

The shocking photo, taken after the assault, shows Shaun’s puffy eyes, with large purple bruises below them and his cut and bruised nose which has been knocked out of place. 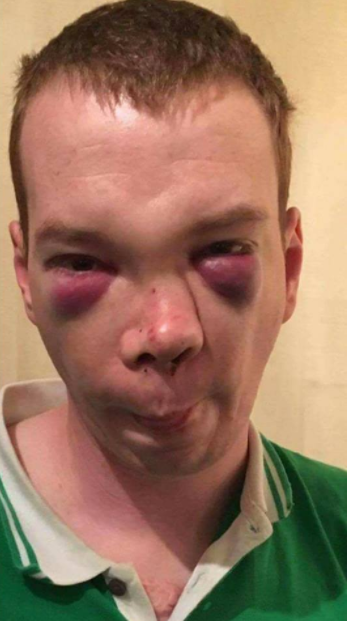 The attack was so severe that Shaun will now require an operation to reconstruct his nose and has been left “very scared” by the incident.

Despite it happening outside the Kwik Fit garage in the town, it is thought the attack took place out of sight of any CCTV cameras.

His aunt, Laura Murray, shared the image of Shaun’s battered face on Facebook last night with the caption: “My little cousin Shaun Mechan was attacked outside Kwik Fit in Kirkintilloch last Friday night.

“He has learning disabilities and whoever done it is the scum of the earth for doing this to a vulnerable adult walking home.

“If anyone has any information call Kirkintilloch police station. Please share.”

Writing later in the comments section of her post, Laura added: “Thanks everyone he’s to have operation to rebuild his nose he’s very scared.

“It’s out of sight of camera where it happened.”

Facebook users have been quick to offer their support.

Demi Hattie wrote: “Oh my god, that’s horrendous. Hope they catch the scum who did this. Poor Shaun.”

Heidi Murray commented: “What a shame, I hope they find the scum that did it.”

Michelle Magee added: “Oh my god, total liberty to do that to such a vulnerable man. Such a shame.”