AN adorable video shows the utter devastation wreaked by a “threenager” after his bean bag explodes.

Colby Stephen left an ever-increasing trail of tiny polystyrene beads throughout the house until one of the bedrooms looks like it is carpeted with thick snow.

Mum Pamela Stephen filmed the havoc which concludes with the three-year-old hilariously pretending it’s nothing to do with him – before trying to frame a pal.

It took Pamela, from Fraserburgh, Aberdeenshire, three hours to return her home to normal.

At the start of the clip Pamela films the white beaded mess up the stairs of her house, with the amount increasing as she nears one of the children’s bedrooms.

As she walks up the stairs, Pamela can be heard saying on camera “what is happening?” as a child can be heard shouting in the background.

Reaching the top of the stairs, the mother-of-three pans the camera around the blue and green tartan carpet that has been completely covered with beads.

Nearing the bedroom, Pamela is heard again, saying “oh dear” before reaching the scene of the crime and stating “the bean bag is dead.”

The patient mum then calls to three-year-old Colby – who calls her “threenager” – asking: “What happened in here?”

Colby is then seen coming up the stairs and saying “me” to the camera before entering the room and saying “oh no!”

Pamela then asks little Colby “who did it?” but he attempts to blame the mess on one of his friends and states “him”.

However, the experienced mum knowingly then asks “who’s going to clean this up?” with Colby innoncently replying “not me”.

Speaking about the funny clip today [TUE], Pamela said: “Basically my friend was round with her two boys who are four and five, so we left them playing ‘quietly’ upstairs whilst we had a coffee.

“We soon realised why they were so quiet.” 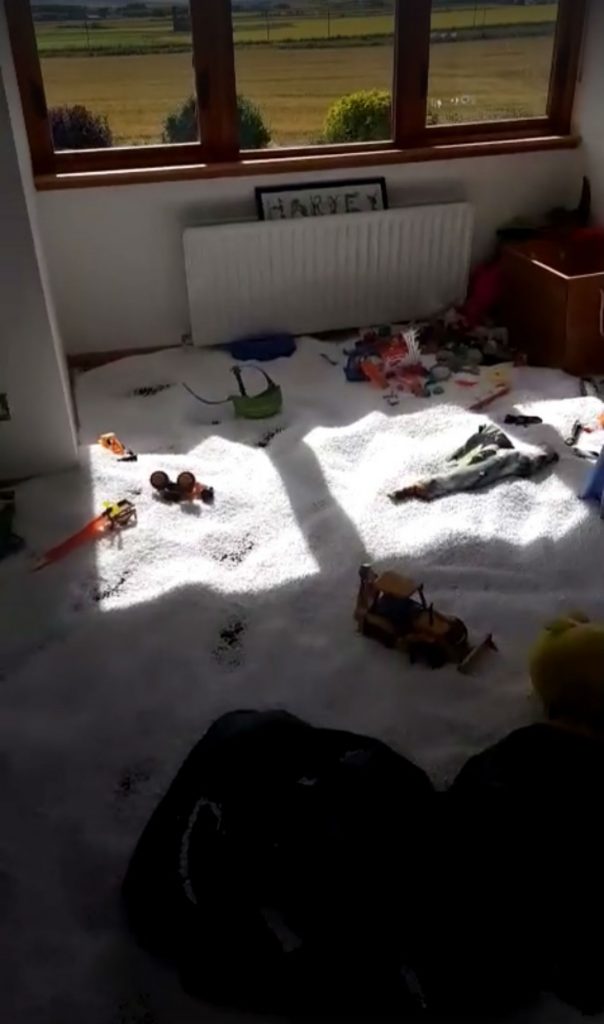 “Colby turned three in June, he has two older brothers who speak for him so his speech isn’t the greatest but basically when I asked him who did it as he’s walking upstairs he says ‘me’ then he looks at it and says oh no.

“Then he tries to blame it on ‘him’ before saying ‘no me’ when I ask him who’s going to clean it up.

“He’s always up to something it’s just part of daily life with Colby!”

Currently the hilarious clip has been view by over 5000 social media users and had nearly 150 likes.

Pamela added: “I didn’t realise so many people would view it, I recorded it to show his dad who’s offshore.”

According to Pamela, the clean up took around three hours and white beads she is still finding the white beads around the house.