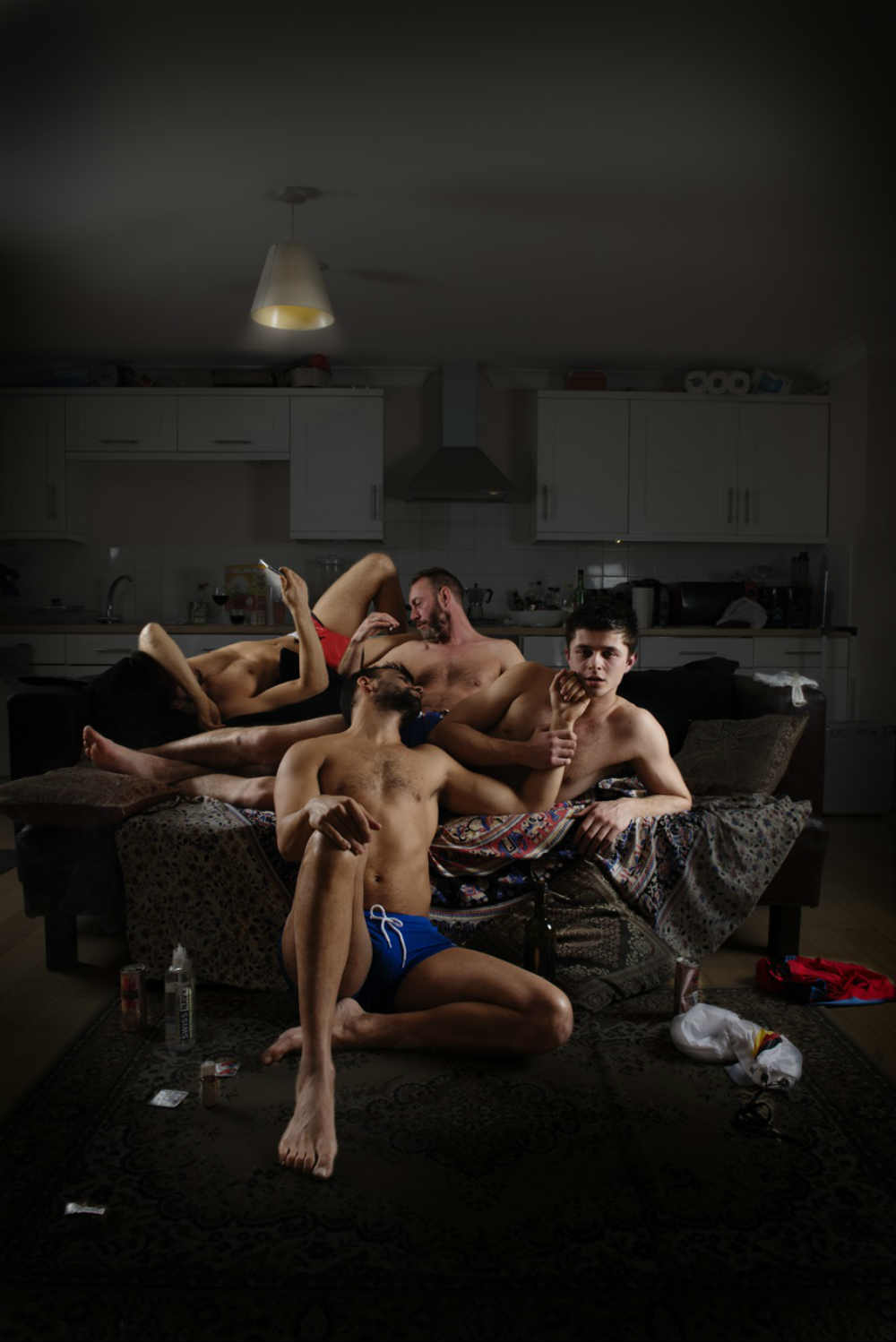 THIS provocative theatre performance, based on events in Clapham, London, is fuelling dialogue on the extent of harm in homosexual chemsex and its effect on love, relationships and health.

Written and directed by former actor Peter Darney, 5 Guys Chillin’ is a didactic, revelatory and candid play, pulling down the fourth wall in an effort to bring the audience into a “chill”.

While “chill” most commonly evokes a laid back atmoshpere, the juxtaposition is stark here, for in gay culture a “chill” can involve use of hardcore drugs, particularly Mephedrone, GHB and Crystal Meth  to quickly interact with strangers for sexual and interpersonal enthrallment.

The format forces discomfiture on the audience, making them choose how they want to be involved with the current “chill” unfolding on stage, while representing the atmosphere created from previous “chills” and, at times, the use of confrontingly vulgar dialogue.

Chemsex is the use of drugs to facilitate and heighten the sensation of sex. It is unabashedly played out by the five male actors: David Palmstrong as J, George Fletcher as M, Tom Ratcliffe as R, Garath Watkins as B and George Bull as PJ.

“Chills” and their effects have only recently surfaced as topical dialogue since David Stuart, a leader on the discussion of chemsex, developed a documentary with Vice Video in 2015.

Of the phenomenon, director Peter Darney said: “I just want you to have an argument in the bar with your mates about how to live your life.

“Even if we decide on doing what we have done before [chills], then at least we have got there through deciding other possibilities”.

Soho-based sexual health trust, 56 Dean Street, is considered one of the leaders in ChemSex responses. It estimates up to seven gay men die each week in London due to the lethal and broad consequences related to chemsex.

In one scene of 5 Guys Chillin’, PJ, played by George Bull, a male of Punjabi heritage battling with his homesexuality and the pressures of his culturally austere parents, wife and child confesses to being involved in previous “chills”.

The character says: “I can say I didn’t enjoy all of it. But I would just do everything to see what I could tolerate. And that was the part actually, ‘cos I can tolerate a lot, and I’m quite strong.”

What the mind and body can withstand is also what leads the dialogue into some very dark places, a crucial element to the divisiveness this play has caused among people of many different persuasions.

Standing outside the Assembly Roxy after the show, I heard one audience member, a performer at the fringe, announce: “I hated it, I want to give up being a homosexual, give up theatre and leave the fringe.”

Commenting on twitter, Samuel Carnall wrote: “Very illuminating! So … who wants to come over for a cuddle and never let me go?”

It’s the coarseness of the highs and lows which prompt people to react to 5 Guys Chillin’, with almost no consensus.

Director Darney has had audience members reach out to him stating that upon watching the play they felt a responsibility to get tested for HIV and Hepatitis C. Even for some who have put off such tests for years due to the fear created by the stigma associated with contracting such infections.

“I should have learned how to behave with people and with having a sex life. And when suddenly people say by the way, you’re an adult, you can marry someone the same sex as you and you can have a relationship and it’s all fine, well actually, I’ve got, 20 years of bullshit that I need to undo.”

The August 17 performance of 5 Guys Chillin’ will involve a post show discussion involving the cast, director and audience members who choose to stay and contribute to the dialogue surrounding chemsex.