THE GRIEVING husband of Kirsty Maxwell has paid tribute to his “beautiful girl” on what would have been her 28th birthday.

Adam Maxwell released a statement on social media this morning saying he will remember his wife’s “big smile and loving heart” and will cherish all the memories they made together.

The 27-year-old, from Livingston, West Lothian, also revealed that this week will mark their first wedding anniversary as husband and wife.

Adam revealed that the family will be paying tribute to Kirsty this week privately and praised the 28 “lucky” years that family and friends got to spend with her.

He posted the heartfelt message with a personal photograph of Kirsty beaming at the camera.

The touching tribute comes just four months after the tragic newlywed plunged 100ft to her death during a friends hen-do in Benidorm, Spain.

Writing on the Kirsty Maxwell Information Appeal Facebook page, set up by Adam and Kirsty’s family, he said: “After four hard long months we now face another very difficult week without Kirsty.

“Today would have marked Kirsty’s 28th birthday. 28 years of wonderful memories, 28 years we were lucky to have her.

“Followed in a few days time by what sould have marked our 1st wedding anniversary together as husband and wife.

“So many happy memories amongst so much sadness. 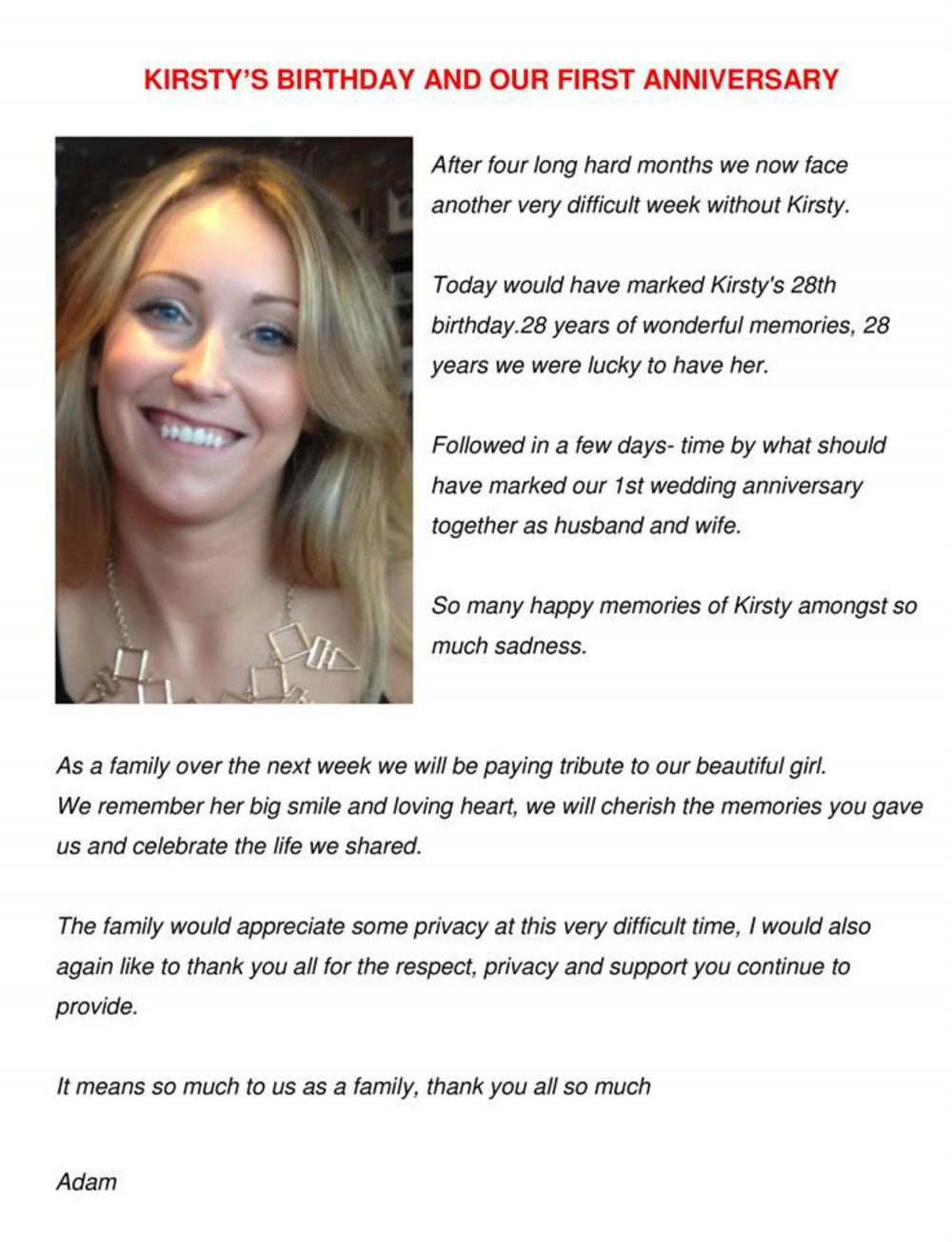 “As a family, over the next week we will be paying tribute to our beautiful girl.

“We remember her big smile and loving heart, we will cherish the memories you gave us and celebrate the life we shared.

“The family would appreciate some privacy at this very difficult time, I would also again like to thank you all for the respect, privacy and support you continue to provide.

“It means so much to us as a family. Thank you all so much. Adam.”

The heartbreaking message comes just days after it was revealed that a new crowdfunding campaign had been launched to help Kirsty’s family cover legal costs probing into her death.

Kirsty fell 100ft at the Apartamentos Payma block in Benidorm while on a holiday with friends in April.

She is believed to have entered a room on 10th floor of the hotel in error shortly before falling to her death.

Five men have been questioned over the unexplained tragedy.

Kirsty’s family lawyer has spoken out in the past saying he believes she had been trying to flee a sex attack.

Adam and Kirsty’s family have been tirelessly appealing for witnesses to come forward in a bid to piece together what happened that night.