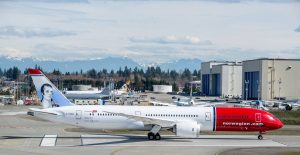 RABBIE Burns has been immortalised – on the tail of a budget airliner’s latest plane.

Scotland’s bard – already known around the world for his classic songs and poems including Auld Lang Syne and A Red, Red Rose – has now been commemorated by Norwegian Air. 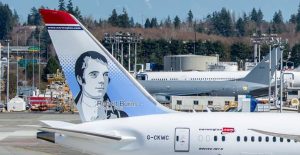 It has taken delivery of a new Boeing 787 Dreamliner, which features a giant image of Burns on its tail. The 338-seat plane will service Norwegian’s long-haul routes from London Gatwick to the USA, Argentina and Singapore.

It means Burns, also renowned for classics including A Man’s A Man For A’ That,  To A Mouse, Tam O’Shanter and Ae Fond Kiss, becomes the first Scottish “tail fin hero” honoured by the European airline giant.

Europe’s third-largest, low-cost airline uses the tails of its aircraft to honour people who it believes have pushed boundaries, challenged the norm and inspired others in their respective fields – and who symbolise the spirit of Norwegian.

“We remain committed to providing great value flights from Scotland and Burns’ creative legacy will fly on with Norwegian as we pay tribute to one of the world’s most renowned poets.” 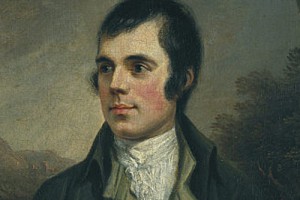 Burns, who was born in 1759, is renowned poet and lyricist. Auld Lang Syne is sung at New Year’s celebrations across the globe, while Burns’ suppers – marking his birth on January 25 – are held by Scots and those of Scots descent in every corner of the planet.

Norwegian operates daily direct flights from Edinburgh Airport to the USA in brand new Boeing 737 MAX aircraft in addition to services to Spain and Scandinavia.