SCOTS have flocked to social media to defend Simpsons’ character Groundskeeper Willie against claims he is a “offensive racial stereotype”.

Fans of the show from Scotland say they love the way the show’s creators portray the ginger-haired, fiery character and have urged the rest of the world to “enjoy the comedy”.

Groundskeeper Willie, who has been a firm favourite on the show since 1991, is known for being almost feral in nature and is immensely proud of his Scottish roots.

He is easily identifiable for his flaming red hair and beard, wearing a kilt and his aggressive temperament and thick, ropey Scottish accent.

But last week his character was thrown into an unlikely race row after one critic, Kyle Smith wrote an article on website National Review saying: “[He is] a cruelly funny send-up of a hot-tempered, hard-drinking Scot as I’ve ever seen.”

Hundreds of social media users have since weighed in over recent days and branded Willie’s character a racist sterotype.

One Twitter user, Harold? @Nikk1066, said: “They should kill off Groundskeeper Willie. It’s an ugly racist stereotype of Celts!”

Michael Gearty tweeted: “I find groundskeeper Willie a racist stereotype also. Homer’s depiction of a lazy useless American male, is also highly offensive. The Simpson writers are all massive racists and should be jailed.”

He wrote: “Should Dan Castellaneta step aside from his role playing Scottish Stereotype Groundskeeper Willie?

“Castellaneta is of Italian descent after all, not proper representation!”

But many Scots have gone online to urge critics to lighten up, including a Scottish church minister.

Martin Fair, Minister of St. Andrew’s Church in Arbroath, wrote: “Sorry but isn’t the whole show based on stereotyping? Groundskeeper Willie, the stereotypical Scot. And as a Christian, should I feel offended by the stereotyping of Ned Flanders?

“How about we all lighten up and enjoy the comedy!

He later added: “I’ve always thought of The Simpsons as being way too clever to do anything that isn’t deeply ironic – and as a result, funny.”

“Dan Castellaneta puts on a (terrible) Scottish accent for Groundskeeper Willie, should I be kicking off and being offended?

“Plenty much more terrible things going on in this world to worry about than an American actor putting on an Indian accent for f*’s sake.”

Dozens of Scots descended on the post branding the character “a f****** icon” and “awesome”.

Scottish YouTube animator, Sarsion, from Dundee, said: “As a Scotsman, as I grew up I absolutely loved representation on the show, even if it was a poor-accented parody with heavy leaning on stereotypes, many of which were fiction made reality judging by how many people here are patriotic enough to emulate characters like ol’ Willie.”

Alan Hodge wrote: “From Scotland, can safely say Willie is a f****** icon and to more degrees than I’m willing to admit is actually accurate in cases.”

Steven Boden said: “Didn’t care who was behind the voice, I’m Scottish and Willie is awesome! Even with the stereotyping. ‘Cause it’s funny!.”

Duncan Scott wrote: “I’m Scottish and I can tell you that nobody is offended by Willie. Because we know it’s a stereotype and it doesn’t represent all Scottish people.”

And a Twitter user, known as DityDan? @albuscus0401 said: “I’m part Scottish and think that the character is hilarious.

“I really don’t see how it’s offensive. It’s clearly not meant to attack the Scottish, it’s more just playfully poking fun at them.” 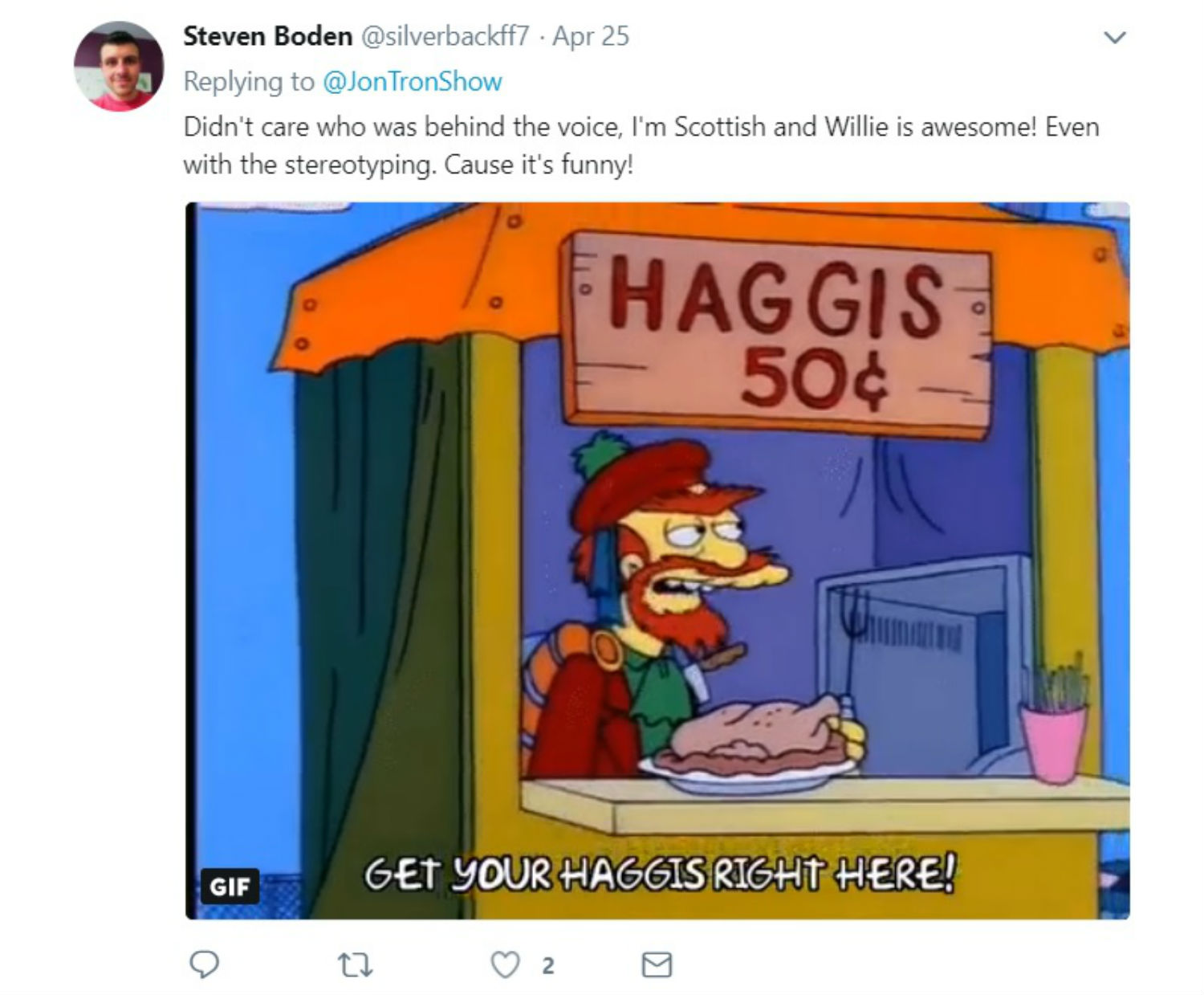 Other social media users who took to the post saying how the reason many Scots aren’t offended is because of their sense of humour.

Voice actor Corey Englerth said: “The difference being there aren’t Scottish people saying that its offensive and requesting it be changed.”

And aspiring voice actor, Felix Camarillo wrote: “ It’s because Scots have a sense of humor and aren’t wee lassies.”

Fresh calls have been put in place on the internet for Dan Castellaneta, who voices Willie, to apologise and step aside from his role.

Willie’s character has been thrown into dispute after Apu Nahasapeemapetilon was discussed in a documentary, The Problem with Apu.

In the show, Comedian Hari Kondabolu talked to a number of celebrities of South Asian descent about the negative impact the character had on them.

The show’s executive producer Al Jean told IndieWire earlier this year: “Some people are offended by the character and I take that very seriously.

“Others really love the character. It’s a difficult choice. I don’t want to offend people but we also want to be funny.”

The Simpsons responded to the criticism in a recent episode where Lisa is shown reading a book about political correctness.

Speaking directly to the audience, she says: “It’s hard to say. Something that started decades ago and was applauded and inoffensive is now politically incorrect. What can you do?”

Critics have since been debating whether Willie is a racist stereotype, after the show addressed recent controversy surrounding Kwik-E-Mart owner Apu.

Willie has featured on the show talking about his views on Scottish independence and rips off his shirt to reveal a “birthmark” on his chest that says “aye or die”.