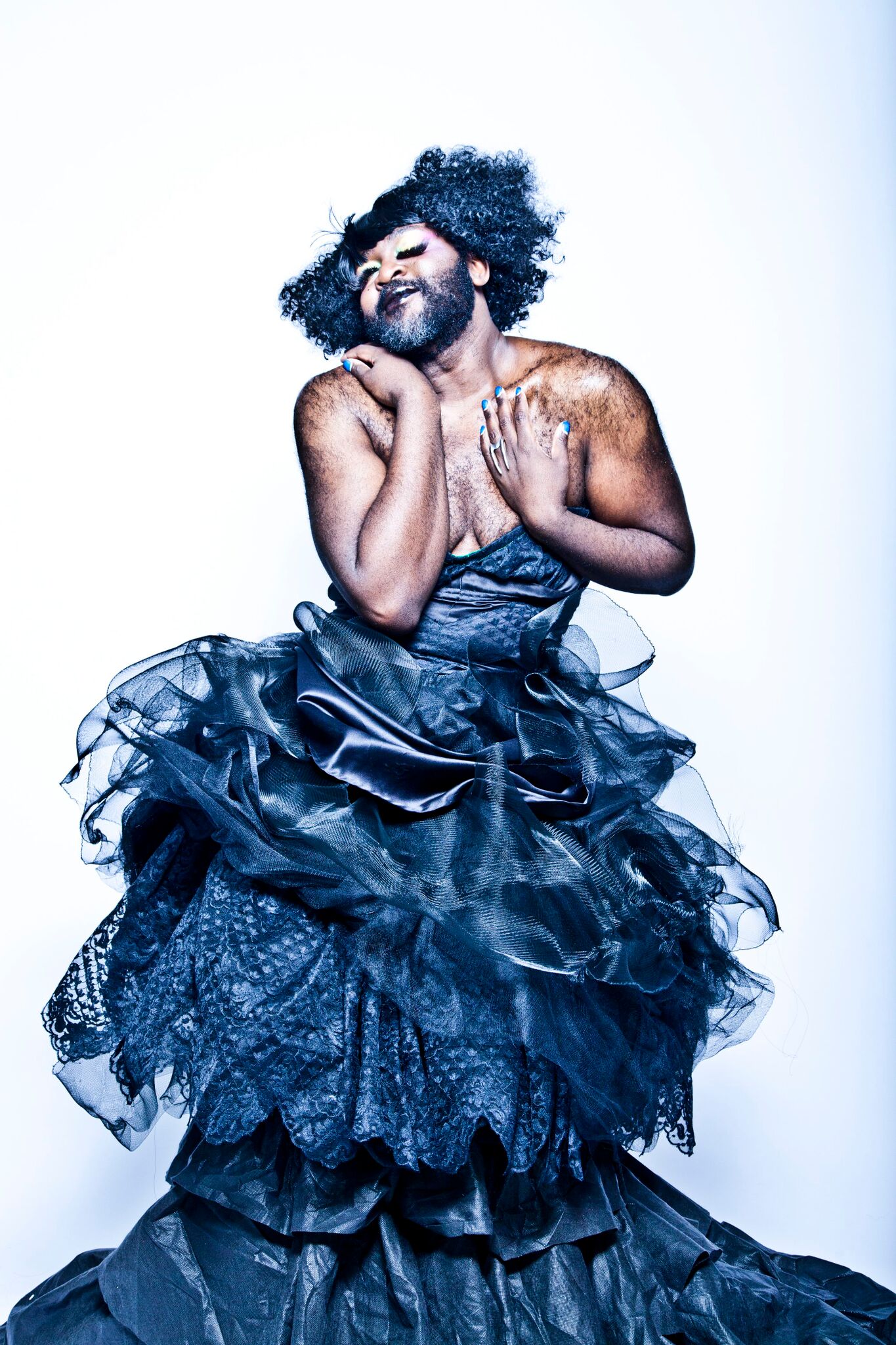 “I am very suspicious of the climate of the world at the moment,” says cabaret phenomenon, Le Gateau Chocolat, in surprisingly reflective mood. “I have to make a conscious decision to either put negative out there, or positive.”

The glum tone of the unique performer knocked me off balance a bit, because I have seen him at work, in full, flamboyant, drag; a diva, who would put Shirley Bassey in the shade, and, in every way, he comes across as a rich confection, effervescent, fizzy, a high-kicking, sparkly, sequinned, vital force of joy.

That’s who I thought he was, so beautifully fashioned is his stage persona, but now I see that there are melancholic caveats that simply make him more human and likeable, as we speak during a Fringe run, which has included an Assembly Gala cabaret, a children’s show and his much-loved international, smash-hit success, ICONS, a glorious romp through opera, rock, and pop that explores hero worship.

The former law student, who self-effaces his formidable talent to something snitchy and little more than serendipitous grace, despite having risen to lofty places like Glyndbourne and stage sharing with electronic wizards, Basement Jaxx, could easily lose himself in a playful pantomime, an alter-ego who tours the world looking for wows.

But the performer, who found his voice, both personally and artistically, a deep baritone like a bright musical comet that shoots through audiences leaving them steeped in stardust as he slides between genres, has something to more say.

Concerned by an epidemic of bullying a number of years ago, he needed to find a vehicle to highlight our essential equality as humans: “What I do in some of my work, in kids shows, in family work, is to underline sameness, because a lot of my life experience points to the fact that I am different. I look different, my sexuality is different, my skin is different, but the bottom line is, we all want the same.”

The sentiment is reflected in his choice of Hans Christian Andersen’s Ugly Duckling as a first foray into the world of children’s entertainment, but does not preclude the other more spangly Fringe offering from the globe-trotting diva.

Whilst Le Gateau wanted to quit law early on, he credits it with gifting him with objectivity and a critical, interrogative mind. The former, he says, helped him transcend bullying and racism to acknowledge that we are all looking for something similar from life; love, relationship, life-affirming praise.

And perhaps because his own battles with depression and mental health were sparked in part by being made to feel different, he has a mission. “It is in my DNA to remind people that we are the same. Maybe that translates as being nice, but the point is to ask people to remember that,” he says.

After growing up in Nigeria, where Draconian homosexuality laws prevented him from coming out even to his beloved mother, and where the pressure was on for him to enter a respectable profession like law, finance or medicine, he found some relief moving to Britain to study at West Sussex University.

Drag he says, offered more freedom, and he insists that it is not an act or a mask: “My drag queen is not me playing somebody else. It is me, under a magnifying glass, more amplified. I am not Lily Savage.”

He seems sad but resigned that his mother still doesn’t know the truth: “It was for her safety and security,” he explains. “Nigeria is a country that has some of the harshest rules against homosexuality. It is taboo in our culture. But I am still her son.”

At times he finds the dissonance of dual heritage and nationality hard to convey to his British friends and in this respect perhaps feels more isolated : “Every coming out story is different. It’s not like everything here in Britain is better and the war has been won…but the conversation here is far more progressed than in many parts of Africa.

“I am just as British as Nigerian. Sometimes the worlds are easy to mix and sometimes they are not. I don’t have all the answers. I am still working it out, hoping to get better answers.

But Le Gateau’s challenges have not stopped him reaching a destination he still finds hard to believe. That striking, silken voice – even beyond his compelling personality – marks him out as much more than a spectacularly animated clothes horse and stops us looking away.

Since his debut in 2011 at the Adelaide Fringe, he has toured the world with cabaret and opera, attracted and featured in the work of contemporary composers, Jonathan Dove and Jocelyn Pook, and starred in Porgy and Bess at the Regents Park Opera.

Working with composer Orlando Gough, he also sang as part of the Flotilla for the Queen’s Jubilee,  has performed at Sydney Opera House and worked with Olivier award-winning circus La Clique/Soiree. He is also engaged with Rufus Norris and Simon Stephens at the National Theatre to reimagine the Threepenny Opera.

Nonetheless, every day xenophobia still gets in the way and is more alarming because it is not just from people on public transport or walking around the city. Demagogic leaders are now involved, which is why insistence on acceptance and inclusion is even more vital.

Whilst Le Gateau feels comfortable in leotards, fishnets and feathers, and dressing as a woman during daylight hours too, he admits there are times when he will opt for jeans and a tee shirt to avoid being tormented on the tube in London.

It’s tough operating in a climate of body-shaming and queer-bashing and where people are saying ‘you don’t belong here because you look different.’ He talks of ‘micro-aggression’ – ‘Where are you from?’ Brighton. ‘Where are you really from?

His biggest compliment for the Ugly Duckling came from a school girl who had stopped eating because bullies were calling her fat, and a deaf child, who used BSL to understand that it was OK to be herself. The tender interpretation of the story was written for Le Gateau’s niece, who it seems he wants to spare from any similar agony.

There is something deeply comforting about the gentleness of the virtuoso singer, elegant reconteur, and fun-loving criminal, that melts you, like a generous, warm hug or the sauce atop a sticky toffee pudding.

The intimidating defensive bitchiness that sometimes accompanies comedy drips off the side of his fork and dissolves into loveliness and he seems to carry stashes of exuberance around in invisible saddle bags, dishing it out liberally to audiences at this his seventh festival.

His dressing up box clearly offers killer distraction. Skin-tight lycra, bold make-up and fairy-lit, silken capes, dress up the singer, who in ICONS tackles crooners from Whitney to Pavarotti with zeal,  and make him seem as assured as Naomi Campbell on a girls’ night out.

The ‘beauty within’ maxim to promote ‘beauty without’ – is working! It is this confidence that helps him deliver sage tropes in the Ugly Duckling, which he quacks and waddles through with grace and charm. Though he caveats that some people no matter how hard they try will never, ever become swans.

“Sometimes it does not get better. Just because you have been through some hardship does not entitle you to this magical getting better. But, somehow, we have to, against all these words, find the strength and focus and possibility to appreciate we are enough.”

Le Gateau has taken everything in life that makes his little heart sing and turned it into a career, at the same time carrying us along in the chorus.