A FAMILY have been left furious after spending almost £3,000 on a dream holiday to discover their apartment leaking and covered in “mould”.

Martina Jacobs-Sarang has accused TUI of “false advertising” after walking into her hotel and finding toilet roll stuffed in the ceiling, soaking up leaking water.

The family-of-four from Bridgwater, Somerset, spent £2,700 for a weeks stay at four-star Alua Miami Ibiza Hotel and Apartments in Es Canar, Ibiza.

But they were shocked at the state of the room they were given when they arrived at the hotel two weeks ago.

Martina took photographs and videos showing water leaking from the room upstairs directly above her apartment.

The 41-year-old also shared images of crumbling, mould-filled walls and ripped fabrics which she discovered inside the apartment.

Martina took to Facebook to share her fury at the travel operator. She wrote: “TUI the home of all inclusive. What a joke.

“They say they haven’t ripped us off. Look at the state of both apartments they fobbed us off with.

“Would you risk travelling with this company? We paid all inclusive, couldn’t even send our children to get a drink of water let alone an ice-cream.”

She added: “When we did go and get a cup of water from the main hotel our lilo’s were stolen.

“Both apartments they gave us one had water pouring in from an existing leak and the second had tissue paper blocking a hole in the ceiling.

“Local store say they will refund us £65 in gift vouchers. What a joke.

“This will go to head office and social media so that other hard working families do not experience the same as we did.”

The horrifying photographs show mouldy walls and a hole in the leaking ceiling – blocked with a tissue. 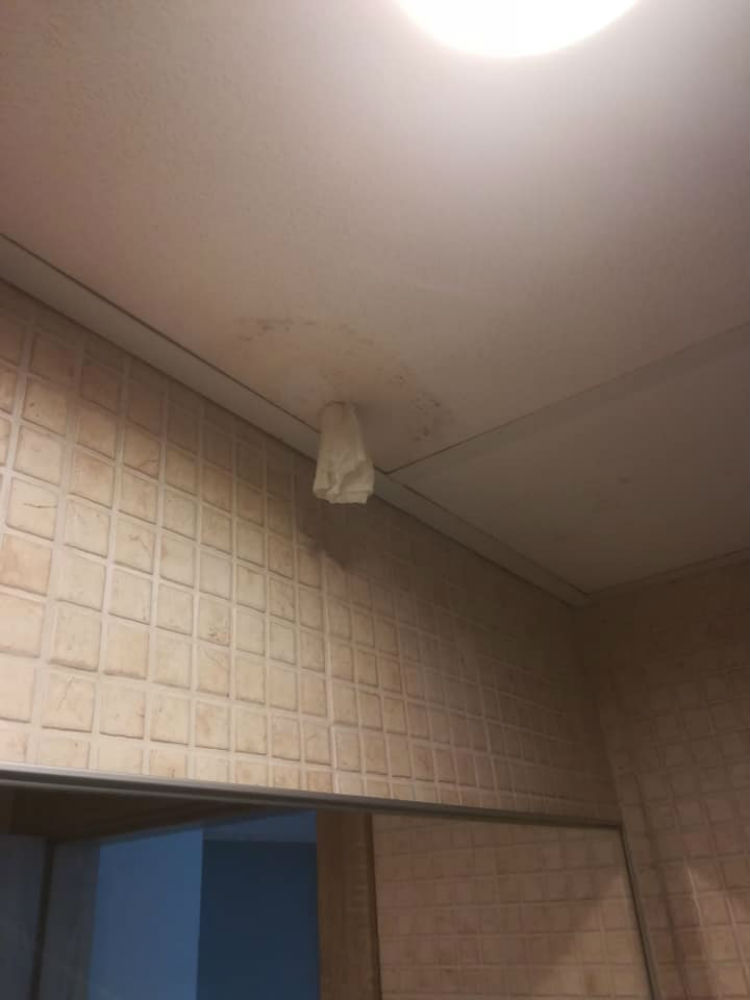 On social media, Sue Saturley wrote: “That’s disgusting. I am really sorry that your holiday has been spoiled.

Caroline Hicks, posted: “Sorry to hear you had to go through that Marti on your holiday. How awful. I really hope you get your money back. That hotel shouldn’t get away with the state the rooms were in. is that even safe?”

Jeanette Coles added: “That’s disgusting. It’s something you look forward to all year and is gutting when it just isn’t what you have booked. Good luck with it, hope you get some compensation.”

The family of four, including Martina’s husband Shadann, 43 and their two children Amelia, 10, and Rokeya, 8.

However, instead of the four-star hotel they were shown in the brochure Martina claims the family were left with a “two-star apartment”.

The family are now considering taking legal action if they are not offered an acceptable offer for compensation and will seek “legal advice” from ABTA.

Speaking today, Martina said: “We will take it that far because it’s unfair to lie and sell a holiday based on inaccurate information.

“There must be other people who will experience the same and be afraid to complain. Unfortunately people don’t like to fight for their rights.

“All you get when you book is pictures of this amazing high class hotel.

“I’m not surprised they don’t show you the apartments as when you get to them they show two stars. When the hotel is four stars. Cheek.

“We are a self-employed family who work hard for a holiday and to have it ruined was so upsetting.

She added: “Unlike employed people we don’t get holiday leave so aswell as feeling like we lost £2700 on the holiday. we also lost 2 wages for the week.

“We would have been better off staying home for a ‘staycation’.”

“Our youngest daughter is highly sensitive to change so it was particularly difficult for her to adjust to not one location but two. It was tricky for her.

“On the second day when our apartment had water pouring in the roof and onto our suitcases, we were told there was no room anywhere else for us and they would send maintenance down.

“Maintenance came and by the evening we had been given another apartment, holes blocked by tissue paper in this second apartment and they said it was an upgrade.

“It was even further away from the hotel as well and on the 3rd floor. Everyone else at the apartments were self catering or half board. And had paid less than half what we had. Crazy.”

After they were moved apartments, the family had a 30 minute round-trip to and from the apartment pool to the hotel pool.

The family have been offered £65 compensation from the travel store but are not happy and are hoping to be refunded for the holiday.

A spokesperson for TUI, said: “We are very sorry to hear about Mrs Jacob-Sarang’s holiday experience and we’re grateful that the matter has been brought to our attention.

“Our holiday advisors are always on hand in resort should customers want to discuss any issues in person when on holiday.

“We want all of our customers to enjoy their holiday with us and we take all customer feedback seriously.

“We will be contacting Mrs Jacob-Sarang directly to discuss the issues raised and to offer a gesture of goodwill.”

TUI customer furious after claiming company cancelled holiday and asked for £2,000 to rebook