BURNS Night is just around the corner and with the night fast approaching many will have whisky as their choice of drink.

Drinkers are being encouraged to experiment with the whisky for the night and to try and make some cocktails.

Bottle Club have announced their most popular whisky cocktails, along with the recipes for people to try out at home

The Robert Burns is one of the classic cocktails that pays tribute to another of Scotland’s finest exports.

The drink itself is a delightful, sophisticated mix that builds on the scotch-vermouth combination of Rob Roy.

The addition of absinthe brings in a  contrasting flavour, though be sure to keep this accent to a dash, as it can easily overpower the drink.

If absinthe is a bit too much for your taste, there is a variation called the Bobby Burns which omits absinthe for Bénédictine.

It is a Scottish tradition to celebrate the poet Burns’ birthday on January 25th of each year, and whether this drink was named for him or not, it is a fantastic choice for the evening’s libation.

The Rusty Nail is the ultimate Scotch cocktail.

It’s a very simple mix of scotch and Drambuie that is served on the rocks. This is designed to be a sophisticated, slow-sipping drink, and it’s excellent after dinner.

You can switch from blended to single malts and explore various brands, choosing a variety that is as top-shelf as you wish.

You may also want to adjust the ratio of the two spirits to fit your taste, as well as the type of whisky you’re pouring at the moment.

The Rob Roy cocktail was named after an operetta that narrated the story of a great Scottish folk hero who supported the poor.

A Scotch version of the classic Manhattan cocktail, a Rob Roy replaces bourbon or rye whisky with Scotch.

The Rob Roy ingredients are also similar to that of a classic Old Fashioned, but the Rob Roy recipe uses sweet vermouth instead of sugar syrup for a richer flavour.

Best served by putting the cocktail glass in the freezer to ensure the Rob Roy stays cold, as the drink is served without ice.

Stirring a Rob Roy cocktail rather than shaking is critical in delicate cocktails with few ingredients, so not to over dilute the drink.

A good Toddy has been said to jump-start mornings, cure colds and play furnace on a frigid evening. Many people believe that its first use was as a medicinal aid, as liquor was known to numb pain, while citrus and sugar (or honey) could soothe a sore throat.

Grab your favourite mug, and heat it with some boiling water, similar to how you chill a Martini glass. After a minute or two, throw away the water, and build your drink in the same mug by combining your spirit with sugar and more hot water.

The Ruby Queen recipe was developed by Rob Krueger of Extra Fancy in New York City.

Though it is filled with a couple of unusual ingredients, the Ruby Queen is quite easy to mix up.

You will need to prepare or acquire fresh beet juice and take a few minutes to make a fresh honey syrup.

It’s a surprise when you taste just how well scotch works against this sweetened vegetable profile, whilst most of us will prefer a more neutral spirit for such a distinct flavour like beets, the whisky adds a depth that vodka and gin cannot.

Simply pour and shake like any other drink and you will have a savoury drink that will rival any Bloody Mary. 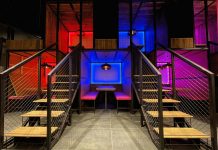