SCOTS stunt cyclist Danny MacAskill has been branded “inhuman” by his fans after sharing a video showing him mastering an impressive, downhill, backwards wheelie.

The 35-year-old Scot manages to hold the wheelie for close to a minute, leaving his Facebook followers blown away by his efforts.

The video was captured on the grounds of Aberystwyth University in Wales and Danny shared the amazing footage onto his Facebook page yesterday.

In the clip, Danny begins by cycling towards a steep hill on the University campus facing forwards.

He impressively flips his blue bike round and pops the back tyre high into the air as he starts to descend down the hill backwards.

Danny, who is originally from Skye, manages to balance himself perfectly as he clutches onto the handle bars and expertly uses his brakes to slow himself down.

Fellow stunt cyclist Duncan Shaw films Danny’s wheelie endeavor and as he approaches a roundabout Duncan can be heard directing him by saying: “Your right, not that much.”

He expertly manoeuvres himself around the roundabout as Duncan says: “That’s it, keep going.”

Danny then comes to a steeper hill and can be heard groaning as he continues to hold the backwards wheelie.

Danny then drops his back wheel over the speed bump and flips his bike round, ending the impressive video.

“Think I might get a sat nav and some wing mirrors for next time.”

Since being shared on Facebook yesterday, the clip has been liked over 7,000 times and has left social media users stunned.

Byron Stewart said: “Danny, you just might be the best in the world at bike control.”

Marko Velcic commented: “So you are also one those who don’t believe in gravity. Wtf man?!”

Danny recently released a video titled ‘The Slabs’ which saw him scale Sgurr Dubh Beag on the Isle of Skye with his bike strapped to his back, before riding down a 900-metre route.

Danny and his team managed to capture footage of him expertly scaling down the steep climb which at times is almost vertical. 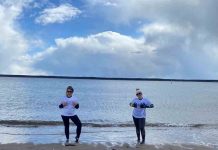 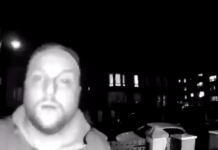