A SHOCKING video shows a cyclist being soaked with a cup of hot chocolate that was thrown from the window of a passing van.

Simon Lowe was furious when the passenger of the Transit van threw the cup at him as he cycled along the A619 road between Baslow and Chestfield in the Peak District.

The 61-year-old had just finished a 100km cycle when he was struck with the McDonald’s cup on his way home.

The clip shows a grey Transit passing Simon on his right before a paper cup is shown being thrown out of the passenger window.

Brown liquid can be seen splattering out of the cup and directly onto Simon who said he thought he was being hit with a bag of sand at the time.

The furious cyclist, from Sheffield, South Yorkshire, can be heard shouting “f***king hell” as he ends up covered in the hot substance.

Simon captured the footage on July 25 but only just posted it on YouTube on September 24 after finding out the driver got away with a fixed penalty notice.

He shared the clip onto YouTube and Twitter where it has has been viewed over 3,000 times and shocked viewers.

Mat Burnham said: “Absolutely unbelievable lack of action. Are we to EXPECT and simply tolerate this kind of behaviour while cycling?”

David Doake said: “I had a cold drink hit me from a crap old car which I worried was something toxic, but was just water thank goodness. I need to use my camera.”

User ‘Urbane Cyclist’ added: “Over the years, in addition to being shouted at, I’ve had eggs and fruit thrown at me, been hit by an umbrella and spat at. Never had hot chocolate.”

Simon said: “I thought I was being hit by sand falling from a builder’s truck, such was the force on my back it could have knocked me easily into the kerb.

“Then, I realised I was soaked all over and my bike was covered in sticky chocolate and I saw the offender drop the MacDonald’s cup into the road.

“The police were unable to find the driver (who was not the registered keeper, although they know his name).

“The driver (of no fixed address) took the vehicle off the road and crunched it, no doubt to prevent him being stopped in the future by the police who might then uncover other nefarious activities.

“Odd thing, the law does not allow the keeper nor the driver to be charged with the assault carried out by the passenger but they can be charged on his behalf with the minor offence of his littering.

“So, the keeper got a fixed penalty notice for littering. Hey-ho, a result of sorts and the driver’s down one van.”

Simon added: “It was malicious. It left me shocked, shaking and bewildered as to why anyone would do that to a cyclist simply minding his own business.

“I was cold too as my jersey and shorts were wet through. I still had to get home for another 40 minutes.

“Can you imagine if he had walked up to me in the high street, a complete stranger, and poured a hot chocolate over a 60-year-old just going about their business? I reckon the police would not have let it go.

“But, he got away with it. So what does he hit the next cyclist with, in revenge for having had the police enquiring after him?”

A spokesman for Derbyshire Constabulary today said: “Officers were contacted by the cyclist to report that the passenger of a van had thrown a cup of cold hot chocolate over them on the A619 in Baslow.

“Video of the incident was provided, and officers contacted the registered keeper of the vehicle.

“As a result, the case has been filed, however, should further information be received by officers then this will be reviewed and further enquiries may be made.” 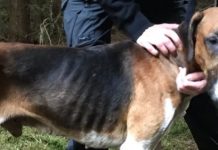