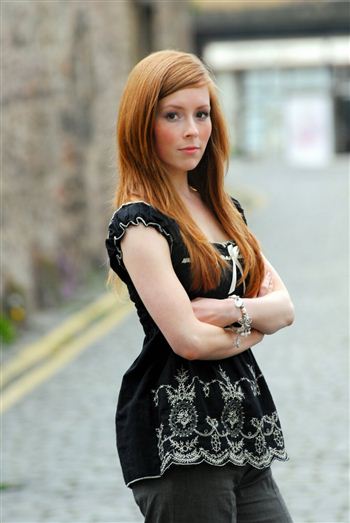 A HORRIFIED house hunter was told she would have to submit a urine sample before she could rent a flat.

Nicola Ward, 23, was left humiliated when one Edinburgh firm demanded the sample for drug testing before they would consider her as a tenant.

Last night she said: ““I was made to feel like a criminal. That kind of test is meant for drug addicts, not for genuine flat-hunters. It was completely unprofessional of them.

Unsuspecting  Nicola was searching for a one-bedroom flat within her £600 per month budget and had registered her details at a number of well-known letting agents, including Umega in the capital’s Gilmore Place.

However, shortly after leaving the firm’s offices she received a bombshell text message which read: “Hi Nicola, forgot to mention earlier that we also require a urine sample from all of our tenants for random drugs testing before they move into one of our properties. Regards, Umega Lettings.”

She added: “I was totally shocked when I was told that, I had never heard anything like it. But the more I thought about it the more annoyed I got, it was completely out of line. I was really embarrassed and insulted. I can’t believe anyone would treat their customers this way.”

Last night Umega was criticised by the UK’s professional body for letting agents after bosses admitted the incident was an “ill advised” hoax and the manager responsible had been disciplined.

The company claimed staff thought Nicola was a snooping rival and intended the text message as “competitive banter”.

However, upset Nicola had never met any of the Umega staff and her efforts to contact them and find out if it was a joke were ignored. She added: “My initial impression of the place was good, the staff were helpful. But unfortunately they didn’t have what we were looking for. When I left, they said they would call if anything came up.

“When I got the text at first, I thought they were serious. Then I figured it had to be some sort of joke, so I replied asking them if it was – but I never got a response.”

The next day, she telephoned the offices of Umega Lettings to demand an explanation and was met with an unapologetic response from the manager.

She added: “Eventually he admitted that it had all been a practical joke. I demanded an apology, but all I got was a sarcastic response and a half-hearted sorry.”

Last year Nicola quit he job with letting agency Alba Residential to more to Norway with her boyfriend, Stephen Murphy, who is a professional ice hockey player and the goal tender with the Great Britain national team.

When the couple returned to Scotland, Nicola moved back in to her family home in Dundee. She was facing a daily commute to Edinburgh after winning back her former job at Alba Residential and started flat hunting in the capital.

Because the credit crunch has sent demand for rental property soaring, her own firm had nothing suitable on its books and she registered with a number of other letting agencies.

Neil McInnes, manager of Umega, admitted his staff recognised the striking redhead as the employee of a rival firm.

“The text was sent by one of our managers. It was an ill-advised joke which shows a complete error of judgement and the member of staff has been disciplined. We accept that although it was meant as a joke, it wasn’t funny. This is nothing but a case of competitive bantering.”

But Nicola’s boss, Paul Dickens, managing director of Alba Residential, said: “When Nicola told me what had happened she was clearly upset and I was so furious I phoned the company to let them know my thoughts.

“The boss of Umega Letting told me it was a joke that backfired because his staff recognised Nicola as an Alba Residential employee and assumed she was doing a ‘mystery shopper’ exercise.

“But that is a thin excuse for something like this – especially since Nicola was a genuine flat hunter with a £600 per month budget to spend. Even if she had been a mystery shopper treating someone in this way is appalling and the whole thing stinks. It is the kind of action that could give everyone in the letting sector a bad name.”

Malcolm Harrison, from the Association of Residential Letting Agencies – a self-regulating body which does not count Umega Lettings among its membership – said: “This is far from professional behaviour.

“We would always recommend that prospective tenants only use ARLA registered agents. That way they are with ARLA trained staff who are adhering to a strict code of conduct. If anything goes wrong or tenants feel they are mistreated they can ask us to look into it for them.”

Nicola and Stephen have since found a suitable home in the Murrayfield area and are due to move in later this month.