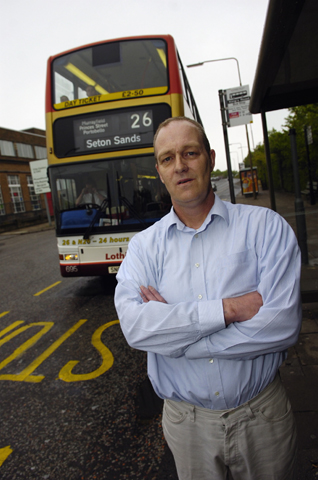 A DOPEY bus driver who crashed a busy double-decker after blowing his nose at the wheel is claiming unfair dismissal.

David Patton, 47, was sacked after his packed vehicle careered out of control down a busy road before eventually slamming into a bus stop.

The father-of-two claims he passed out after using his hanky but should not have been fired for his poor driving.

Patton, from Edinburgh, woke up to find his front windscreen lying on top of him after he had crashed into a bus stop.

He said: “I had a cold at the time and I gave my nose a good blow.  I set off and then I blacked out.

“When I came to, the windscreen had come in on top of me and the bus was shaking.

“One of the passengers came rushing down to make sure I was all right.  The bus had travelled about 30 or 40 yards down the road so I must have blacked out.”

Patton was later sacked by Lothian Buses for his poor standard of driving but maintains he had previously never been faulted during his 20 years in the job.

He has now decided to take the company to an employment tribunal for unfair dismissal.

He said: “They can’t just sack me because I blew my nose and blacked out.  They don’t believe I blacked out and are making a monkey of me.

“They were out to get me because I am the type of person who stands up for himself.  I am not interested in money – I just want my name cleared.

“I have been told many times that I am an excellent driver.  As soon as I got in the cab that was my office and I was like clockwork.

“If they wanted to get rid of me on medical grounds then fair enough, but not for the standard of my driving.”

Patton said he had undergone an operation to remove a cancerous lump a few months before the accident, which happened in November last year, and had been suffering a cold.

He insists he has had a blackout since then and his health is under investigation by doctors.

He can no longer get work driving buses and is working at Asda at weekends.

A spokeswoman for the employment tribunals service confirmed it had a record of the case but said no date had yet been set.

Mr Patton was facing prosecution on a charge of careless driving but the case has now been dropped.

George McKendrick, Lothian Buses’ operations manager, said: “This particular case is subject to an industrial tribunal and therefore we cannot comment on any claims made by Mr Patton as it would be prejudicial towards its outcome.”

Developers on board to drive extended 41 bus route