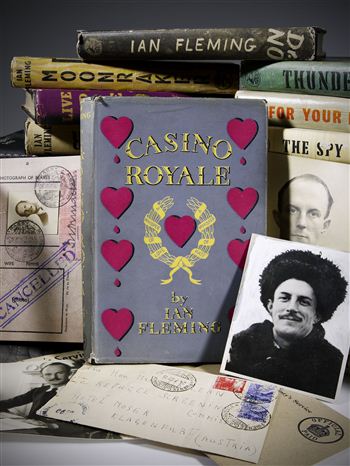 A COLLECTION of James Bond memorabilia owned by the Scot who was the inspiration for the fictional secret agent sold for an amazing £31,200 yesterday.

The historic set of novels once belonged to the late Sir Fitzroy Maclean, a diplomat, soldier and MP, and was only expected to fetch around half that figure.

But after a fierce bout of bidding, Sir Fitzroy’s full collection of first edition Bond novels, personal papers and pictures sold to a London company who are the leading Bond specialists  in  the  world.

The books were in good condition and complete with the original dust covers, with some of the rare works signed by Maclean himself.

The collection was sold at the Lyon and Turnbull auction house in Edinburgh.

John  Gilbert,  of  Adrian  Harrington,  said “The  books  will  be  used  as  background material  for a bibliography I am writing on Fleming. I have the full support of the Fleming family and the book will be published in the next 18 months.

“The books and background material including Fitzroy’s passport, invitations from the French ambassador to cocktail parties, photographs of Fleming with Tito and diplomatic visas will prove invaluable to my research.”

Accompanying the novels was a collection of personal material belonging to the former Conservative MP including photographs of Maclean with Yugoslav leader Tito, luggage tags, a 1951 letter to Sir Fitzroy from a former German employee and, most valuable of all, the celebrated diplomat’s passport

The passport was issued on 1 June 1938, and gives Maclean’s residence as the British Embassy in Moscow.

It comes complete with the manuscript note that it is valid for “British Empire, all countries in Europe including Union of Soviet Socialist Republics & Turkey, China, Japan & all Countries in the Far East”, with Iran and Iraq added in another hand.

This was the passport, valid until 1 June 1943, which accompanied Maclean on his famous journeys in central Asia in 1938, and has entry and exit stamps for China, the Union of Soviet Socialist Republics, Germany, Afghanistan, Iraq, Iran, Poland, Estonia, France and Italy.

Various real-life personalities have laid claim to being the inspiration behind Fleming’s ficticious creation, and of them all Sir Fitzroy Maclean – diplomat, war hero, traveller, clan chieftain and outstanding public servant – is one of the most plausible.

A personal friend of the author and his family, Maclean, like Fleming, studied at Eton College and came from an Anglo-Scottish background.

Born in 1908, Ian Fleming spent his early years at Eton, moving onto to the Royal Military Academy at Sandhurst.  In 1931 he joined Reuters but it was during World War II that Fleming began to gather his insider knowledge of secret operations as personal assistant to the Director of Naval Intelligence at the Admiralty.

After the war Fleming began to develop his Bond stories from his house, Goldeneye, in Jamaica.

Casino Royale, the first Bond volume, was published in 1953, and over the next decade, until Fleming’s death in 1964, over 40 million copies of Bond’s adventures were sold.

Sir  Charles McLean, son  of  Fitzroy,  said: “ The books  have  been in my father’s  library since  he died in 1996, and the family decided they should be sold so  that they can be treasured by a collector of Ian Fleming’s works. They gave my father much pleasure and I hope they will bring someone else the same.”

During the war, Maclean, who refused to admit or deny his Bond connection, volunteered for and distinguished himself in the newly established SAS in North Africa.