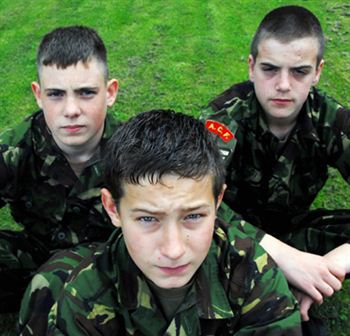 THREE hero army cadets have been honoured for their bravery after they ran to the aid of an ice-cream man who had just been blasted with a shotgun.

Aaron Moore, 16, and 17 year-olds Liam Dugan and Daniel Sturrock, all from Penicuik, Midlothian, were making their way to cadet training in December 2006 when they heard two loud gun shots.

A local ice-cream man, Jim Allison, then stumbled out of his van shouting to the boys he had been shot.

As the gunman made his escape, the heroic schoolboy cadets immediately rushed to the Mr Allison’s aid, helping him back into his van, applying vital first aid and telephoning for the emergency services.

They carried on despite fears the gunman may return and despite not having police assistance for ten minutes.

The brave cadets were awarded the Lothian and Borders Police Meritorious Award and a Royal Humane Society Certificate at a ceremony at the Assembly Rooms in Edinburgh yesterday.

Liam Dugan said: “It’s really nice to honoured in this way and my family are quite proud of us.

“At the time, I didn’t really think of the dangers of the gunman coming back and my first concern was the injured man. My medical training just kicked in.

“We were all just keen to help save him as he was in a bad way.”

The award is the latest in a line of honours for the youngsters who were also recently rewarded with the prestigious St John life-saving medal from the Priory of Scotland of the Order of St John.

Dozens of other heroic civilians and police officers were also rewarded with Police Meritorious Awards during yesterday’s ceremony.

Another hero rewarded yesterday was 13-year-old Stuart McLaren, who tackled a 6ft shoplifter.

As some adults stood by, young Stuart burst into action by bravely chasing the thief down an Edinburgh street.

He held onto the culprit until shop staff arrived to deal with the situation, and he then directed police to the place the thief had hidden his loot.

He said: “I’m not sure why I did it. I just wanted to help the shop staff and didn’t want the man to get away.

“I was a bit scared when I was running after him but after it was over, I was glad that I had helped.

“The police came to my door that night to thank me and take my details. And a few weeks later I got a letter through the post saying I was being nominated for a meritorious award.”

Sergeant John Forsyth, and Constables Craig Sorbie and Andrew Rooney, were handed the bravery award for fearlessly confronting and disarming a crazed gunman.

The two constables were on patrol in Seafield, West Lothian when they received a call concerning a man who had threatened his partner with a gun and a knife.

On arriving at the house, they spotted the man climbing out of a ground floor window. The man then walked towards the police car, pointing the gun at both officers and shouting he would shoot them.

He struck the car with his fist before Constable Rooney reversed the vehicle a safe distance away and called for assistance.

Meanwhile, the suspect attempted to carjack a passing motorist, who luckily refused to stop, and then threatened to shoot an innocent bystander who was walking nearby.

Sgt Forsyth, a firearms expert who was off-duty at the time, became involved in the drama and noticed the gunman was now training his sights on the two officers.

He bravely grabbed the suspect and made him drop the weapon, which, unbeknown to them, turned out to be a high standard replica.

In July 2007, another courageous award recipient, Brian Laidlaw, from Edinburgh, was working in his garden when he saw two men speaking with an elderly neighbour.

Mr Laidlaw, 42, listened in to the conversation and overheard the two men saying they would accompany the lady to the post office where she could withdraw money.

After contacting police, Mr Laidlaw followed the men and his neighbour to the nearby post office.

Mr Laidlaw waited for the lady to go in to the shop, while the men sat patiently outside.

He immediately followed her in and told her of his suspicions, saying he had contacted police.

Mr Laidlaw then made sure the vulnerable pensioner stayed in the post office until police arrived, whereby the two men were detained.

It was subsequently discovered that the two crooks had committed several previous bogus workmen crimes, and had earlier targeted Mr Laidlaw’s elderly neighbour.

Mr Laidlaw said: “I overheard these two dodgy looking guys talking to an old neighbour and immediately became aware they were ripping her off.

“I was absolutely raging with anger, but managed to contain myself and do the right thing. I followed them and called the police.

“Luckily, I got there in time to alert the woman who was drawing cash out just as I arrived.

“It’s a proud day for and my family, and I’m just glad to be honoured in this way.”

He was also honoured with a Lothian and Borders Police Meritorious Award.

Temporary Chief Constable Tom Halpin, who was presenting the awards, said: “These ceremonies are really important and it’s important we publically recognize the bravery of the members of the public.

“What never ceases to amaze me in circumstances like we have heard today is the range of people who intervene for the greater good in the community.

“If ever there was a real demonstration about community working together, this is it today.”