AN INJURED tortoise is about to experience her first winter without hibernating after being attacked by the family dog.

Gertrude, a 35-year-old Spur Thigh Tortoise, was set upon in her garden by her owner’s pet Labrador, Hamish.

After suffering cuts and bruises which required stitches Gertrude is now recuperating – but her injuries mean she will have to stay awake this winter to recover.

Instead of letting her go into hibernation for the cold months, vets will trick the shelled pet into thinking it’s still summer using heat lamps.

The unlucky tortoise was at Edinburgh University’s Hospital for Small Animals yesterday as they held a free clinic for pre-hibernation MOT’s.

Gertrude was out playing in her owner’s back garden in July when pet Labrador Hamish took a fancy to her.

The dog grabbed her in his jaws and started to throw her about the garden before owner Joan Stroud sprung into action and managed to save her pet. 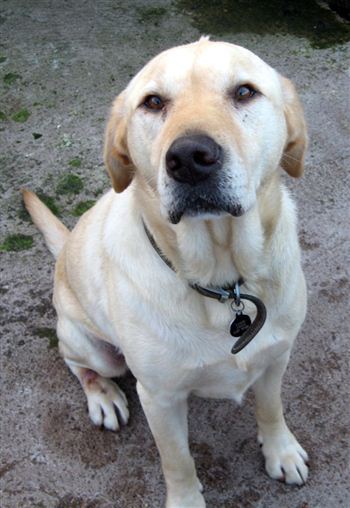 Mrs Stroud, 62, a retired head teacher from Dumfries, said: “It was a lovely day and we put Gertrude out to eat the dandelions. Unfortunately, our dog thought she was a rabbit and picked her up and ran off with her to eat her.

“I shouted loudly because I was so upset, and managed to grab the dog and pull him away from the tortoise.

“Our own vet tried to help, but she was too badly injured and we eventually were sent here to the Hospital for Small Animals.

“I’ve had tortoises for about 60 years now, and I bought Gertrude while on holiday in Kendall around 30 years ago. I’ve actually had Gertrude longer than I’ve been married to my husband.”

Mrs Stroud has now been advised by vets to stop Gertrude hibernating so she can fully recover from her injuries.

The cute reptile is to be confused into believing it is still summer by keeping her warmer than usual and by exposing her to as much light as possible.

Mrs Stroud said: “We’ve got to keep her very warm because it’s all about temperature and light. We’ve got a heat lamp and an ultra-violet light, so she’ll believe it’s warmer than it actually is.

“Hamish was very repentant about what he had done. He knew immediately he had done wrong. So when he sees her now his tail and head both go down and he looks very guilty.

“I don’t think he’ll touch her again in a hurry, he knows it was a bad thing to do.”

After the attack Mrs Stroud rushed Gertrude to the University’s animal hospital in Midlothian for treatment.

She had to have stitches put in to a tail wound and was put on a drip to feed her during her two week stay.

Vet Kevin Eatwell said: “We see lots of dog attacks on tortoises and Gertrude was very lucky to survive. 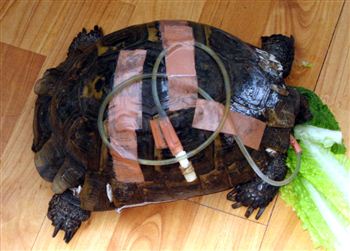 “It’s not just the shell that suffers when these types of attacks take place.

“She had to cleaned, and was then given anti-inflammatory medicine and pain killers. We then had to put a feeding tube in place to give her support with food, liquids and drugs.”

Gertrude is now back home in Dumfries where she and Hamish have become firm friends again.